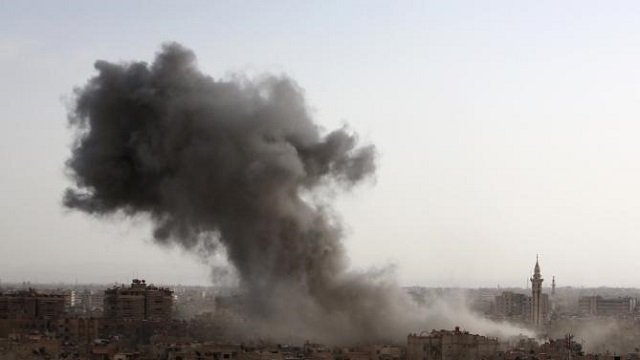 September 30, 2015 10:20 am 0
To defeat ISIL tell them a woman pilot led the bombing
Who Are These ISIS Guys and Why Is Obama Willing to Bomb Them?
Assad Forces Execute 10 Children

Wonder where are those conservative radio shows pundits who cheered Putin on when he told the world he invaded Syria to defeat ISIS. It turned out, as we have always predicted, Putin invaded Syria for one reason only: To save the Assad regime from its demise.

Between a KGB agent who lies, cheats, and deceives and a sociopath who tortures, gasses, and massacres his own people backed by a potent propaganda machine, most people are at a loss of who to believe. Most who support the Assad regime in the West are either as ignorant as Barack Obama is when it comes to understanding how lethal and dangerous Assad is to U.S. interests or are they are Syrian-Americans Assad supporters parading as concerned Americans.

There would be no ISIS, and no jihadists in Syria had it not been for Assad. Chew on that thought next time you stand by the psychopath Assad.

Putin’s air strikes in Homs and Hama are intended to kill the Syrian moderates and the Islamists threatening Assad. The area covered by Putin’s strikes this morning has not a single ISIS fighter. When France’s foreign minister Laurent Fabius took a swipe at Putin and challenged him to strike ISIS, he knew exactly what Putin’s motives were in Syria. They are not to battle ISIS.

In the meantime, while Obama catnaps with a sombrero under a tree somewhere on the White House lawn, Putin dispatches a three-star General who met with the military attache at the Baghdad U.S. embassy in Iraq. According to CNN, the three-star Russian general asked that the U.S. evacuates its air force from Syria.

Under the Barack Obama Administration, America has been reduced to a nation at the receiving end of threats from world renowned thugs.

Instead of striking ISIS, Putin struck Syrian rebels who oppose the terror of Assad. They include moderates the U.S. has been supporting.

How does it feel to be an American third-rate citizen of the world whose country is being bullied by a first-rate thug?