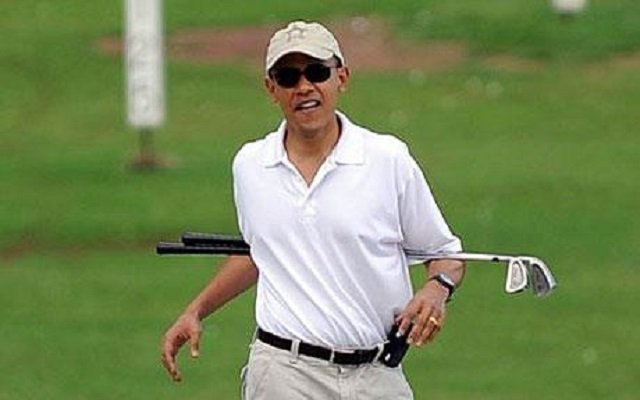 September 24, 2015 9:45 pm 0
Mr President Can Syrians Borrow Some Gas Masks?
How Could Obama Intimidate the Iranian Parliament?
Who Will Hold Barack Obama Accountable?

Russia’s defense ministry on Thursday said it will hold naval drills in the “East Mediterranean” in September and October, as the West frets over a military buildup by Moscow in Syria.

The exercises include three warships from Russia’s Black Sea Fleet, including the Saratov landing ship, the Moskva guided missile cruiser and the Smetlivy destroyer, the ministry said in a statement.

The drills will involve “40 combat exercises, including rocket and artillery fire at sea and airborne targets,” the statement said.

While Putin flexes his muscles, President Obama is cleaning his nine iron.

The ministry said that the Mediterranean drills — which were restarted in early 2013 — had been planned since the end of last year and did not link them to the conflict in Syria.

The United States has accused Moscow of sending troops, tanks and fighter jets to Syria in recent weeks, sparking fears that Russia could be preparing to join in fighting alongside its long-standing ally Baschar al-Assad.

Syrian officials said this week that they have received new warplanes and sophisticated missiles from Russia and some reports in Russia alleged that Moscow has dispatched soldiers to the war-torn country. Putin flexes his muscles while Obama keeps mum.

In an interview with Interfax news agency, the Syrian ambassador to Russia Riad Haddad said that Russia’s support on the ground “will happen if it is needed.”

“Russia’s help will help Syria finally win over terrorist groups,” he said, adding that there is a “high level of cooperation” between Syria, Russia and Iran on the conflict.

Russia officially alerted the airport in Cyprus earlier this month through the international aviation authorities to divert aircraft from the area between Syrian port of Tartus, where Russia has a naval facility, and Cyprus.

The Moskva cruiser, the flagship of the Black Sea Fleet, left its base in Crimea on Thursday and is now heading to the exercises, the ministry added separately.

Russia, which has supported the Syrian regime throughout the four-and-half year conflict that has claimed some 300,000 lives there, says any support is in line with existing military contracts and that personnel have been sent to train the Syrian forces.