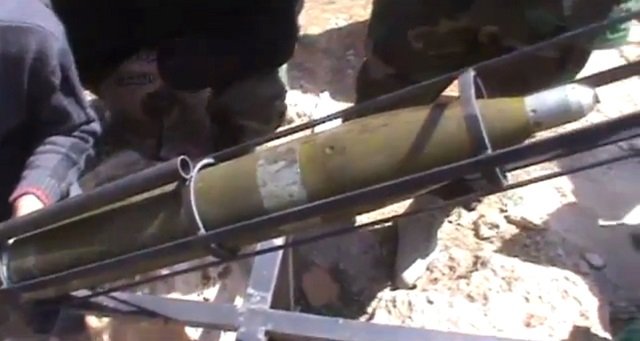 Syrian rebels welcome Russian troops by firing several rockets at an airport on the coast said to be hosting them.

In a video posted late Friday, rebels warned the Russians that they will not enjoy peace in Syria. The fighters are then seen loading and launching multiple rockets from a mountainous area.

Earlier this week, new satellite imagery showed the recent arrival of Russian tanks, armored personnel carriers and other military equipment at an air base in Syria’s coastal Latakia province, confirming reports by U.S., Israeli and other officials of a Russian military buildup.

The imagery also confirms extensive new construction, including a runway being built at the air base inside the Basel Assad International Airport.

“We declare that we are targeting the Basel airport that has been turned into a Russian base,” says a fighter, standing in front of two masked men and the rocket launcher.

Russia’s intervention in Syria has been widely criticized by Syrian opposition and rebel groups. Russia says its recent military buildup in Syria is designed to fight the Islamic State group. In reality, though, Russia needs IS to show who would be Assad’s alternative.

The Syrian National Coalition, the main Western-backed group, condemned earlier this week what it called “direct Russian military intervention” and described such a step as “hostile behavior.” The coalition’s statement said the Russian intervention “turns its forces in Syria to occupation forces.”

Russia has been one of Assad’s strongest allies and used its veto power four times at the U.N. Security Council to prevent international sanctions on Syria.