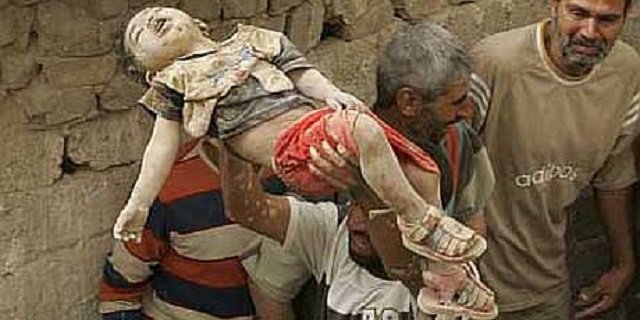 September 25, 2015 9:46 am 0
Hezbollah Says Greater Presence in Syria
After Assad, Naivete is our Worst Enemy
Saudi Arabia strikes back

Assad is happy he has Western support for his tyranny and terror. Russia is happy it has its bear paws in Syria, which opens the whole region to its direct influence. Iran is happy its Hezbollah terrorists can take a breather from dying on Syria’s battlefields. Obama is happy he can concentrate on golfing or blaming the devil for his disastrous policies.

Who is not happy you ask? The people we should fear the most. Those pesky ISIS and al-Qaeda terrorists whose legitimacy among Arabs just shot through the roof the moment the West agreed to keeping Assad in play, and the Syrian people who suffered much at the hands of a genocidal maniac.

European leaders should ask themselves this question: Are we better off cultivating indirectly more terror in the Arab world by supporting tyrannical rulers who gas their own people? Or are we better off ignoring Assad and absorbing more refugees? If there was ever a case to explain what the Sword of Damocles is, this is it.

The option of striking the Assad regime is long gone now that Russia planted its bear paws in Syria. Wonder if regrets are starting to haunt the appeasers.

Acquiescing to Assad solves a short-term problem (i.e. Syrian refugees) at a high cost of another long-term one (i.e. More Islamic terror); and since politicians always tend to get aggravated by short-term problems while forgetting that kicking the can may come back to haunt their countries later, just watch terror explode in Syria to levels that were simply implausible yesterday.

The West has outsourced the task of defeating ISIS – and indirectly permit Putin to exterminate the rebellion against Assad – by trusting the Russians to finish the job. They must reason that if ISIS could be quickly defeated, the risks of quickly supplementing its ranks with fresh new recruits might diminish.

It is an inventory problem. The faster people buy products off a supermarket shelf, the faster the shelves empty if supplies lag behind. The faster Putin kills the Islamists, the faster its ranks empty if it fails to recruit fast enough.

This formula, however, does not take into account the population at large. It assumes our fight against the Islamist terrorists is strictly fixated to the elements fighting on the battlefields who could be hunted with lethal military equipment and intelligence. In this formula, Syrian population support and that of tens of millions of Arabs is ignored.

And this is where the big problem lies. It is unimaginably hard to defeat an enemy that enjoys the support of the people it has carved its defensive positions behind their homes, schools, and hospitals. Unless civilian casualties become inconsequential, something Russia has a long history for the worst behavioral consequences.

Russian presence in Syria is a mass rendition program Europe is standing behind with one minor difference. Instead of sending the enemy to camps, send the camps to the enemy.

Great military power cannot defeat a just cause. One powerful side fights for a paycheck at the end of the month (i.e. Russians), and the other weaker side fights for justice and survival (i.e. Syrian people). History tells us the weaker side always prevails against a stronger side whose will to win depends on how big a paycheck it earns.

Analysis: Is Syria now a direct threat to the U.S.?
If we do not defeat Assad, ISIL may defeat us
Syria crisis: Doctor criticises Miliband over MPs’ vote
Putin Terror 436 Western Appeasement 483