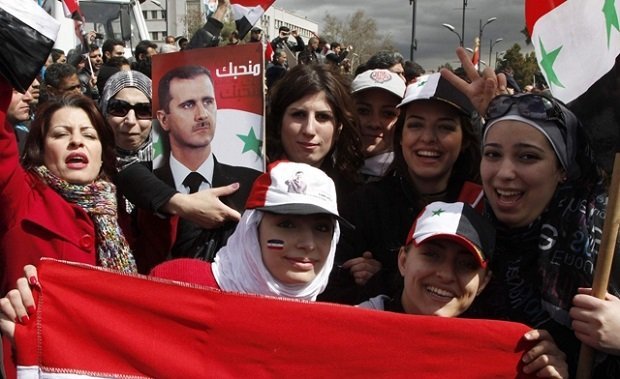 October 21, 2015 1:06 pm 0
When Western Technology aids in Killing Innocent Syrians, It is Hard to Turn a Blind Eye
Keep dreaming Assad
To Save Austin Tice

When the psychopath Assad unleashed hell upon the Sunni Muslim women and children with the aim of ethnically cleansing Syria in the service of the racist Iranian regime, he also unleashed Sunni terror the kind of which we have never witnessed elsewhere. Not even in Afghanistan. Assad also unleashed a recruiting machine the West will have to combat for decades to come as long as Assad remains in power and Iran is provided the means to expand its footprint of terror in the region with Barack Obama’s Iran Deal help.

When Sunni Saddam Hussein became a U.S. liability, the world almost unanimously stood by the Bush Administration to neutralize his terror machine. The same people today refuse to relinquish their support for the Assad regime under the guise his alternative are terrorists, which is far from the truth. In their minds, democracy for Iraq is a must even though Iraq is governed by roaming extremist gangs and militias accused of war crimes in the service of their terror masters in Tehran. but democracy for Syria suddenly has become a taboo because Sunni extremist gangs, also accused of war crimes, are roaming its countrysides in the service of an ideology as dangerous as the one hatched by the Wilayat al-Faqih supporters in Iran.

Syria and Iraq are alike, yet Iraqis are provided the chance to decide their fate, but the Syrian people are left to rot in refugee camps in Turkey, Jordan, and Lebanon.

Do you know how many Sunni recruits, who see the above faulty Western logic with regard to Iraq and Syria, are willing to fight Assad? In the hundreds of thousands. As long as Assad remains in power, we say to all the Assad supporters we hope you understand the consequences of your decision. You have no clue what you are unleashing with your Assad support. You are your own worst enemy.

Of 23 million Syrians, there must be one person, be they Alawites, Christians, Druze, or Muslims who can lead this nation that most Syrians would agree upon to save whatever remains of a nation Assad destroyed intentionally. If you cannot find the courage to find that person and let Iran and Russia realize the folly of their support for a mass murderer, do not complain about the ensuing terror and the reckless violence gripping Syria.

Do you think Vladimir Putin cares about the destruction of Syria and its people? His KGB roots force him to focus on Assad who represents Russian interests. That Assad is harming Syrian interests is of no consequence to Vladimir Putin. Only Syrians at home and the Diaspora have to act to save their country. Their support of the Mullahs in Iran or Putin only serve their own interests, not Syria’s. The same goes for the Arab countries mired in Syria’s civil war in support of extremists fighters and terrorists.

So, if you are willing to watch Syria disintegrate, watch your next of kin ride boats to Europe for fear of the unknown, and witness the Christians of Syria suffer another 20 years of war, then by all means, your support of Assad is justified. But if you want to put an end to this madness, then come together to find an alternative to Assad to stop Sunni and Shiite terrors from destroying this historic nation of yours.

You have no clue how stubborn and determined Sunni terror is to remove Assad from power, which will eventually succeed no matter who stands by Assad because his regime is surrounded by 350 million angry Sunnis fighting a long war against few million Alawites and Christians. The odds of Assad winning over the long-term are worse than nil.

Look at how much powerful Israel has suffered at the hands of terror to fully grasp what awaits Syria if Assad remained in power and his entourage that committed crimes against humanity go unpunished.

Whether you are an Assad supporter because you have ulterior motives, or an Assad supporter because you want to save your skin, Assad is not the answer to a brighter future in the region. The moment you realize how harmful your support is to your own destiny, the higher the chances you could save whatever remains of Syria by agreeing on an alternative to impose on the greater will of foreign interference.

The Stupidest U.S. Secretary of State
Shift policy on Syria
What Assad Fears is What the US Avoids Like the Pest.. Go Figure
Opinions 1017 Syrian Revolution 1335