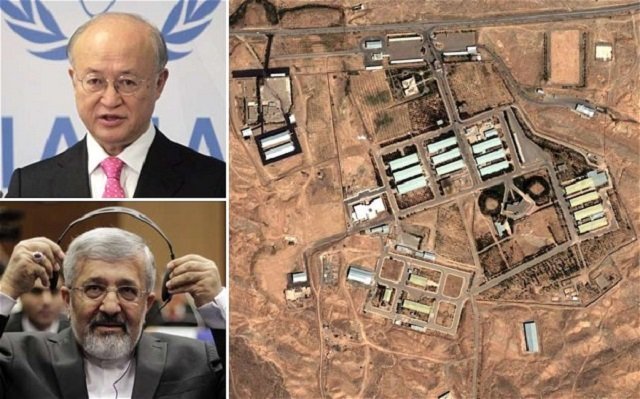 August 27, 2015 5:10 pm 0
American Muslims Have Much To Prove
Obama Made Every American the Target of Terrorists
American and Israeli Fates Are intertwined

Iran appears to have built an extension to part of its Parchin military site since May, the U.N. nuclear watchdog said in a report on Thursday, as part of its inquiry into possible military dimensions of Tehran’s past nuclear activity.

A resolution of the International Atomic Energy Agency’s Parchin file, which includes a demand for fresh IAEA access to the site, is a symbolically important issue that could help make or break Tehran’s July 14 nuclear deal with six world powers.

Is Obama asleep at the helm while Iran builds for an American day of reckoning?

“Since (our) previous report (in May), at a particular location at the Parchin site, the agency has continued to observe, through satellite imagery, the presence of vehicles, equipment, and probable construction materials. In addition, a small extension to an existing building” appeared to have been built.

The changes were first observed last month, a senior diplomat familiar with the Iran file said.

The IAEA says any activities Iran has undertaken at Parchin since U.N. inspectors last visited in 2005 could jeopardize its ability to verify Western intelligence suggesting Tehran carried out tests there relevant to nuclear bomb detonations more than a decade ago. Iran has dismissed the intelligence as “fabricated”.

Under a “road map” accord Iran reached with the IAEA parallel to its groundbreaking settlement with the global powers, it is required to give the Vienna-based watchdog enough information about its past nuclear activity to allow it to write a report on the long vexed issue by year-end.

“Full and timely implementation of the relevant parts of the road-map is essential to clarify issues relating to this location at Parchin,” the new IAEA report said.

According to data given to the IAEA by some member states, Parchin might have housed hydrodynamic experiments to assess how specific materials react under high pressure, such as in a nuclear blast.

“We cannot know or speculate what’s in the (extended) building … It’s something we will technically clarify over the course of the year,” the senior diplomat said. The report said the extended building was not the one that some countries suspect has housed the controversial experiments.

A BAD NUCLEAR ACCORD

Under its Vienna accord with the powers, Iran must put verifiable limits on its uranium enrichment program to create confidence it will not be used to develop nuclear bombs, in exchange for a removal of sanctions crippling its economy.

Iran has for years been accused of stonewalling the IAEA inquiry into “possible military dimensions” (PMD) of its nuclear project. But the Islamic Republic delivered on a pledge under the “road map” to turn over more information by Aug. 15.

The IAEA report said the agency was still reviewing the PMD information Iran provided. Agency Director-General Yukiya Amano said on Tuesday the information was substantive but it was too early to say whether any of it was new.

The success of the deal between Iran and the powers will hinge on IAEA verification of Iranian compliance.

The agency has come under pressure, especially from U.S. lawmakers who will hold a critical vote next month on whether to ratify the deal between Iran and the powers, for not publishing its “road map” agreement with Tehran.