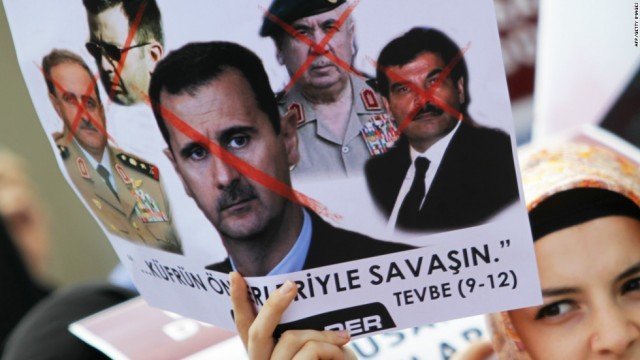 Preparing for the Approaching Syrian Endgame

Preparing for the Approaching Syrian Endgame – By James Phillips

Bashar al-Assad’s dictatorship has been rocked by a string of military defeats and by internal tensions within the minority Alawite-dominated regime that is battling for its life against a rising tide of predominantly Sunni rebel groups. Casualties, defections, and loss of territory have severely undermined the Syrian Army and Syria’s security services, forcing the Assad regime to increase its dependence on Iran and its client Shiite militias.

The Obama Administration should use today’s Camp David summit to increase cooperation with Arab allies to bolster the strength and unity of Syria’s fractured rebel coalition against the Assad regime, Iran, and al-Qaeda groups inside Syria. Washington should also push for greater Arab support in defeating the Islamic State (formerly known as ISIS) inside Iraq and Syria and for greater security cooperation against Iran, including an integrated missile defense system to defend Arab allies against Iran’s ballistic missiles.

Rebel groups recently seized the city of Idlib and areas nearby, further loosening the Assad regime’s already weakened grip on northwestern Syria. Although the regime maintains the upper hand in Damascus and predominantly Alawite areas of western Syria, it has lost ground steadily in northern, eastern, and southern areas. The Syrian Army and security forces have been worn down and demoralized in a grinding war of attrition that has been waged since 2011. Recently, two top internal security officials were purged and another was killed under mysterious circumstances amid reports of internal dissension and rumors of an aborted coup attempt.

Meanwhile, opposition forces have increased their battlefield effectiveness with hard-earned experience, greater foreign assistance, and increased unity of operations as bigger factions have absorbed smaller factions. The improved battlefield cooperation of disparate rebel groups also reflects better coordination of aid from foreign backers. In particular, Saudi Arabia’s new King Salman has elevated the priority of the struggle against Iran over the fight against the Muslim Brotherhood, which has improved bilateral relations and strategic coordination with Turkey and Qatar, both of which support Syrian rebel groups linked to the Brotherhood.

The overstretched Syrian security services have gradually lost control of Sunni-populated areas and may soon be relegated to Damascus, major cities in central Syria, and the Alawite heartland along the Mediterranean coast. Although Assad continues to proclaim his authority over the entire country, he has become a failing sectarian bully, unpopular within his own Alawite sect and increasingly dependent on Iran, Hezbollah, and Shiite militiamen from Iraq, Afghanistan, and Pakistan. As long as he remains in power, Syria will remain a chaotic, failed state in which al-Qaeda and other Islamist extremists will flourish.

The Obama Administration’s hesitant and vacillating Syria policy and its diplomatic courtship of Iran have left Arab allies alarmed and skeptical about the dependability of the United States as an ally. The Administration’s initial neglect of the Syrian opposition and its decision to provide too few arms too late to moderate rebel factions helped enable Islamist extremist factions, including the Islamic State and al-Qaeda’s Jabhat al-Nusra (the Support Front), to dominate the rebel camp. The Administration’s failed diplomatic efforts to promote a political solution through a transitional government led it to shortchange support for armed factions that could increase the pressure on Assad to agree to such a transition.

Today’s Camp David conference provides the White House with an opportunity to reset its disastrous Syria policy and restore the trust of skeptical Arab allies. Unfortunately, only two of the six invited members of the Gulf Cooperation Council (GCC), Kuwait and Qatar, are likely to send heads of state. King Salman of Saudi Arabia and Bahrain’s King Hamad have publicly snubbed the White House and are sending crown princes due to fundamental policy disagreements with the President over Iran and Syria. The rulers of Oman and the United Arab Emirates, both of whom are in poor health, also are sending subordinates.

At Camp David, President Obama should:

Salvaging the Trust of Arab Allies

The six members of the GCC harbor strong doubts about the Obama Administration’s credibility as an ally in view of its naïve and risky pursuit of a nuclear deal with Iran and its disastrous Syria policy. Like Israel, they are concerned that Obama’s rush to embrace Iran will undermine their own national security, but unlike Israeli Prime Minister Benjamin Netanyahu, they prefer to demonstrate their unhappiness by sending subordinate leaders to Camp David rather than by publicly criticizing the Administration.

Although the Administration is unlikely to alter its strategy in the Iran nuclear negotiations, it could salvage the Camp David conference and partially restore the trust of GCC allies by taking a harder line against Iran on other issues, including working with GCC allies to bolster Syrian rebels against Iran’s ally in Damascus and against Islamist extremists.

—James Phillips is Senior Research Fellow for Middle Eastern Affairs in the Douglas and Sarah Allison Center for Foreign and National Security Policy, of the Kathryn and Shelby Cullom Davis Institute for National Security and Foreign Policy, at The Heritage Foundation.

Preparing for the Approaching Syrian Endgame