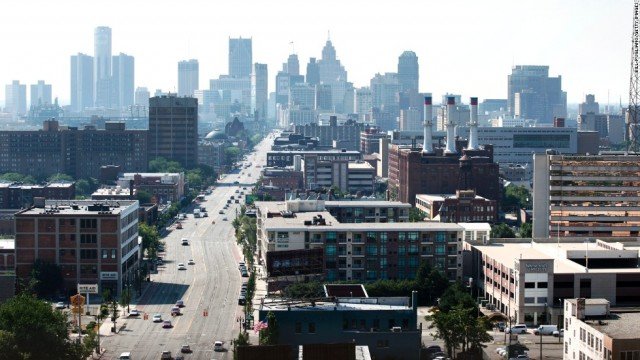 May 14, 2015 3:26 pm 0
The Jew killers
Another Israeli Attack Against Iranian Military Assets in Syria
Obama GCC Summit: Who is Lying to Whom?

Detroit, a once great city, has become an urban vacuum. Its population has fallen to around 700,000 from nearly 1.9 million in 1950. The city is estimated to have more than 70,000 abandoned buildings and 90,000 vacant lots. Meanwhile, desperate Syrians, victims of an unfathomable civil war, are fleeing to neighboring countries, with some 1.8 million in Turkey and 600,000 in Jordan.

Suppose these two social and humanitarian disasters were conjoined to produce something positive.

Gov. Rick Snyder of Michigan, a Republican, has already laid the groundwork. In January 2014 he called for an infusion of 50,000 immigrants as part of a program to revitalize Detroit, and signed an executive order creating the Michigan Office for New Americans.

Syrian refugees would be an ideal community to realize this goal, as Arab-Americans are already a vibrant and successful presence in the Detroit metropolitan area. A 2003 survey by the University of Michigan of 1,016 members of this community (58 percent of whom were Christian, and 42 percent Muslim) found that 19 percent were entrepreneurs and that the median household income was $50,000 to $75,000 per year.

What confidence can we have that traumatized war refugees can be transformed into budding American entrepreneurs? We cannot know for sure. But recent evidence of recaptured children from the clutches of the Lord’s Resistance Army in Uganda and victims of violent crime across five continents reveals that they become more active citizens than similar compatriots who have not suffered from these traumatic events. In the Zaatari Refugee Camp in Jordan, Syrians, despite psychological scars and limited resources, have set up 3,500 shops, stores and other businesses.

Refugees resettled from a single war zone have helped revitalize several American communities, notably Hmong in previously neglected neighborhoods in Minneapolis, Bosnians in Utica, N.Y., and Somalis in Lewiston, Me.

Resettling Syrians in Detroit would require commitment and cooperation across different branches and levels of our government, but it is eminently feasible. President Obama and Congress would have to agree to lift this year’s refugee ceiling by 50,000. The State Department, which handles overseas processing of refugees, would need to open offices at the camps in Jordan and Turkey, determine eligibility and administer a lottery for resettlement. Homeland Security, which controls the borders, would have to carry out accelerated security checks, as has been done in the past for Vietnamese and for Iranian religious minorities. Health and Human Services would need an expansion in the $1.5 billion it budgets for refugee resettlement.

The Treasury Department and the Department of Housing and Urban Development could also help. The Home Affordable Modification Program, part of the 2008 federal bailout of financial institutions, was meant to help places hardest hit by home-price declines. But the program has not been fully utilized, in part because of stringent oversight requirements. Cities like Detroit have gotten permission to use funds from the program to demolish abandoned properties and create parks and green spaces. But it would be better to spend the money on helping refugees renovate once-abandoned homes.

Finally, grants from the federal government and from philanthropic foundations would be needed to help the local Arab-American community supply social services for the newcomers.

Of course, local buy-in is a sine qua non. Refugees are by no means the only source for the regeneration of Detroit. Its more settled populations, including African-Americans and Latinos, are bringing great energy and resources to the city’s renewal. But Syrians would bring new vigor and catalyze its nascent recovery.

Some skeptics will point to the difficulties of assimilation, noting past concerns in the Detroit area about the integration of Iraqi refugees. But there is no evidence to suggest that the Detroit area is a powder keg of anti-immigrant sentiment. Quite the contrary: From its original Native Americans to the Great Migration of Southern blacks to the infusion of Hispanic and Arab immigrants, Detroit has been a melting pot of religions, ethnicities and cultures.

In 2013, the city, which has a higher proportion of black residents than any large city in America, elected its first white mayor in more than 40 years. The following year, the city showed remarkable resilience and unity in emerging from municipal bankruptcy, with a reorganization plan that, among other things, preserved the collection of the Detroit Institute of Arts and gave the city space to invest in long-neglected public services.

Other skeptics will say that the plan would fail because the most ambitious Syrians would leave the city once they achieved economic security. There would be no legal way to prohibit this, of course. But the Syrians would be in the region with one of the most established Arab populations in America, surely an incentive to put down roots. Moreover, if small business and home-ownership loans were extended, the refugees would have a financial incentive to remain.

Finally, some will call this plan politically dead on arrival, given skepticism toward immigration, particularly in the Republican Party. But it’s worth noting that the 2003 study of the community found that two-thirds of respondents said they had voted for George W. Bush in 2000; refugee populations with traditional social views and a knack for entrepreneurship are not going to make Michigan less of a campaign battleground.

More important, both parties can agree that resettling destitute, innocent refugees is consistent with America’s moral and ethical commitments; it would send a powerful message to President Bashar al-Assad, the Islamic State and the world about American compassion and ingenuity.

Are the benefits to Detroit, to a devastated Syrian population, and to American ideals worth overcoming the expenses and administrative complexity of this proposal? We think so.