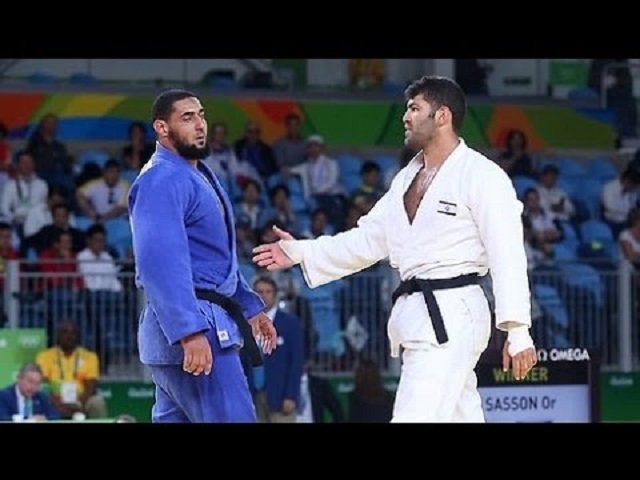 The Meaning of an Olympic Snub

August 16, 2016 9:43 am 0
Is Obama Providing Putin with Intelligence on Syrian Opposition Positions?
Syria is Down to Four Chefs in its Kitchen
This life is on you Denis McDonough

Source: Wall Street Journal – by Bret Stephens (The Meaning of an Olympic Snub)

The Arab world has a problem of the mind, and its name is anti-Semitism

An Israeli heavyweight judoka named Or Sasson defeated an Egyptian opponent named Islam El Shehaby Friday in a first-round match at the Rio Olympics. The Egyptian refused to shake his opponent’s extended hand, earning boos from the crowd. Mr. Sasson went on to win a bronze medal.

If you want the short answer for why the Arab world is sliding into the abyss, look no further than this little incident. It did itself in chiefly through its long-abiding and all-consuming hatred of Israel, and of Jews.

That’s not a point you will find in a long article about the Arab crackup by Scott Anderson in last weekend’s New York Times Magazine, where hatred of Israel is treated like sand in Arabia—a given of the landscape. Nor is it much mentioned in the wide literature about the legacy of colonialism in the Middle East, or the oil curse, governance gap, democracy deficit, youth bulge, sectarian divide, legitimacy crisis and every other explanation for Arab decline.

Yet the fact remains that over the past 70 years the Arab world got rid of its Jews, some 900,000 people, while holding on to its hatred of them. Over time the result proved fatal: a combination of lost human capital, ruinously expensive wars, misdirected ideological obsessions, and an intellectual life perverted by conspiracy theory and the perpetual search for scapegoats. The Arab world’s problems are a problem of the Arab mind, and the name for that problem is anti-Semitism.

As a historical phenomenon, this is not unique. In a 2005 essay in Commentary, historian Paul Johnson noted that wherever anti-Semitism took hold, social and political decline almost inevitably followed.

Spain expelled its Jews with the Alhambra Decree of 1492. The effect, Mr. Johnson noted, “was to deprive Spain (and its colonies) of a class already notable for the astute handling of finance.” In czarist Russia, anti-Semitic laws led to mass Jewish emigration as well as an “immense increase in administrative corruption produced by the system of restrictions.” Germany might well have won the race for an atomic bomb if Hitler hadn’t sent Albert Einstein, Leo Szilard, Enrico Fermi and Edward Teller into exile in the U.S.

These patterns were replicated in the Arab world. Contrary to myth, the cause was not the creation of the state of Israel. There were bloody anti-Jewish pogroms in Palestine in 1929, Iraq in 1941, and Lebanon in 1945. Nor is it accurate to blame Jerusalem for fueling anti-Semitism by refusing to trade land for peace. Among Egyptians, hatred of Israel barely abated after Menachem Begin relinquished the Sinai to Anwar Sadat. Among Palestinians, anti-Semitism became markedly worse during the years of the Oslo peace process.

In his essay, Mr. Johnson called anti-Semitism a “highly infectious” disease capable of becoming “endemic in certain localities and societies,” and “by no means confined to weak, feeble or commonplace intellects.” Anti-Semitism may be irrational, but its potency, he noted, lies in transforming a personal and instinctive irrationalism into a political and systematic one. For the Jew-hater, every crime has the same culprit and every problem has the same solution.

Anti-Semitism makes the world seem easy. In doing so, it condemns the anti-Semite to a permanent darkness.

Today there is no great university in the Arab world, no serious indigenous scientific base, a stunted literary culture. In 2015 the U.S. Patent Office reported 3,804 patents from Israel, as compared with 364 from Saudi Arabia, 56 from the United Arab Emirates, and 30 from Egypt. The mistreatment and expulsion of Jews has served as a template for the persecution and displacement of other religious minorities: Christians, Yazidis, the Baha’ i.

Hatred of Israel and Jews has also deprived the Arab world of both the resources and the example of its neighbor. Israel quietly supplies water to Jordan, helping to ease the burden of Syrian refugees, and quietly provides surveillance and reconnaissance capabilities to Egypt to fight ISIS in the Sinai. But this is largely unknown among Arabs, for whom the only permissible image of Israel is an Israeli soldier in riot gear, abusing a Palestinian.

Successful nations make a point of trying to learn from their neighbors. The Arab world has been taught over generations only to hate theirs.

This may be starting to change. In the past five years the Arab world has been forced to face up to its own failings in ways it cannot easily blame on Israel. The change can be seen in the budding rapprochement between Jerusalem and Cairo, Riyadh and Abu Dhabi, which might yet yield tactical and strategic advantages on both sides, particularly against common enemies such as ISIS and Iran.

That’s not enough. So long as an Arab athlete can’t pay his Israeli opposite the courtesy of a handshake, the disease of the Arab mind and the misfortunes of its world will continue. For Israel, this is a pity. For the Arabs, it’s a calamity. The hater always suffers more than the object of his hatred.

The Meaning of an Olympic Snub

Sunni World is Uniting Fast Against Iranian Hegemony
A Tale of Two Surges by Two Presidents
As If Syria No Longer Exists, Or Exists for a Sinister Purpose
Opinions 795 Radicalism 547 Support U.S. Allies 148 Things That Matter 341