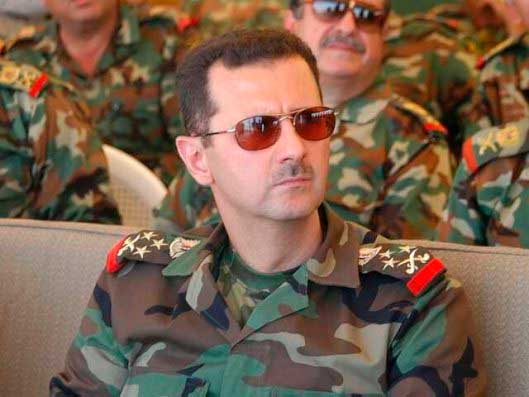 When the Syrian people began their revolution in 2011 to free themselves from the war criminal terrorists in Damascus headed by Chemical Assad, the regime chose to call anyone that opposes it as “Terrorists”. For Assad, a mother with children who never carried a weapon is a terrorist just because she opposes his torture chambers. We say ignore Chemical Assad calling civilian opposition terrorists.

As such, how dumb is al-Jazeera news service for repeating Syria’s foreign minister characterization of the Syrian people? Real terrorists and innocent civilians Assad gasses with abandon are both called terrorists by the mouthpiece Walid al-Moallem. We say ignore Chemical Assad calling civilian opposition terrorists.

Al-Moallem took to the United Nations to accuse the United States of war crimes while calling Syria’s civilian populace “terrorists”. To allow an illegitimate regime of terror such a podium shows the hollowness of the United Nations. Moreover, the body that embraces real terrorists as well as real peacemakers wants the peacemakers to dance with mass murderers. It is a formula the U.N. wants us to accept as normal. We should not.

One way for the United States to prevent the Assad regime of terror the luxury of label control is to continuously highlight Assad war crimes. The U.N. Commission of Inquiry on Syria should issue weekly press releases showcasing some of the crimes the regime committed against Syrian families. There are thousands of stories to tell. Ambassador Nikki Haley and her staff could use that inquiry to highlight some of these stories on a regular basis.

We cannot let the terrorist Assad control the label of who is a terrorist and who is not.

Furthermore, the matter should of concern to John Bolton’s NSC as well.