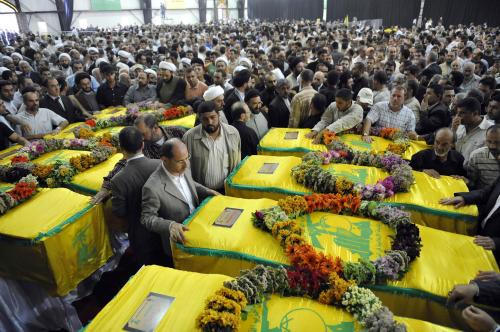 We Will Bury Hezbollah in Syria

The venerable al-Nahar website (Lebanese Newspaper) NaharNet reported that thousands of Hezbollah fighters are engaged in the Qalamoun mountains against fighters from Jabhat al-Nusra. The battles raging have, in general, favored Hezbollah.

It is absolutely normal for Hezbollah to win in Lebanon after committing thousands of fighters. The Qalamoun mountains represent a lifeline for the terror organization through which weapons and materials find their way to the south of Lebanon.

According to NaharNet, “Thousands of fighters, who hail from various Lebanese towns, are participating in the war raging in al-Qalamoun,” prominent Hezbollah sources told the Kuwaiti al-Rai newspaper on Thursday. The sources told the daily that the fighters are fully equipped and supported by a logistic team and air-led strikes by the Syrian army.

In other words, fully-equipped Hezbollah, with help from Syrian Air Force, is now fighting for its very own survival. Qalamoun in the hands of al-Nusra would be the beginning of the end of Hezbollah if the terror organization could not reverse their gains.

The same Hezbollah sources told NaharNet that they considered the Qalamoun battle as the “harshest” conflict that Hezbollah has been engaged in. Told differently, Hezbollah winning has come at a high price.

All that said, Hezbollah fighting inside Syria is a different story. Syrians we know have said in the past, “We will bury Hezbollah in Syria”, and so far these moderate FSA defectors have held their promise.

Hezbollah may have suffered as many as 1,500 deaths in Syria. A number that has not been disputed, nor denied by anyone associated with Hezbollah in Lebanon. When in fact Syrians say “We will bury Hezbollah in Syria”, their predictions seem to hold true when Hezbollah engages in battles inside Lebanon.

Infighting among family members who lost their sons and Hezbollah have been flaring recently. The Algemeiner reported the following:

Hezbollah has also been confronting a relatively new phenomenon: strident criticism from its Shia base. Many Shia families see the war in Syria as a war that is not theirs and have criticized Hezbollah for sending their sons into battle.

When a convoy to Lebanon brought back 20 coffins carrying Hezbollah fighters who fell in Syria, it roused anger among the families of the dead. Violent confrontations erupted between the families and Hezbollah, according to NRG.

We will bury Hezbollah in Syria. Which may be the reason why Hezbollah is committing its troops today to fighting more in Lebanon than Syria.

We Will Bury Hezbollah in Syria