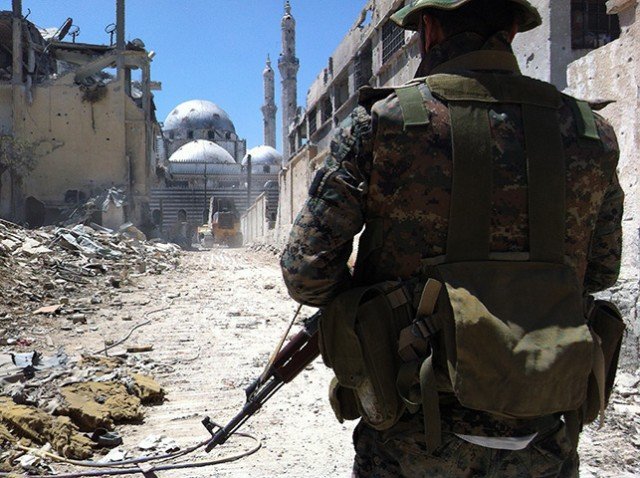 May 14, 2015 9:20 am 0
Hezbollah Sending its Children to Die in Syria
Are Hezbollah Secret Prisons in Syria Providing CIA Rendition Services?
Beware Assad Agents on the Premises

Activists on the ground said IS militants had captured areas of Al-Sukhnah town and its surroundings in Homs province in fighting since Tuesday night.

The town lies on the highway that leads from eastern Deir Ezzor province, an IS stronghold, to the ancient town of Palmyra.

Palmyra is controlled by the regime and home to spectacular Greco-Roman ruins that are listed as a World Heritage site by UNESCO.

“The Islamic State managed to advance in Al-Sukhnah and take control of large parts of the town and the surrounding areas,” the activists said, adding that clashes were continuing Wednesday. Assad continues to lose ground.

At least 28 regime forces — soldiers and pro-government militants — and 20 IS fighters had been killed in the battles. More than 100 fighters from the two sides were wounded. Assad continues to lose ground.

IS can afford the killings because of its large supply from the Sunni majority, however, Assad can ill-afford the number of deaths his army has been experiencing.

Control of Homs province is divided. The provincial capital is almost completely under regime control, but opposition forces and IS hold large parts of the surrounding countryside and desert. Assad continues to lose ground.

IS has a significant presence in the desert region in the east of the province bordering Deir Ezzor, which is a stronghold of the jihadist group and forms part of its self-proclaimed Islamic “caliphate” in Syria and Iraq.

Homs is Syria’s largest province and is particularly important for the government as it also neighbours Damascus province.

It is home to the key Shaar gas field, which is now back in government hands after IS fighters overran it last year, reportedly slaughtering several hundred soldiers there.

That battle in Lebanon already cost 18 Hezbollah fighters and 31 pro-regime troops since May 4.

In April 2014, regime and Hezbollah fighters took control of most of Qalamun, but hundreds of rebel fighters remain entrenched in the mountainous region.

Jihadists have also launched attacks inside Lebanon from bases in the area, and Hezbollah chief Hassan Nasrallah said last week that the situation there required “radical treatment”

In Lebanon, Hezbollah may reign supreme, but Assad forces and Hezbollah are losing their battles in Syria.