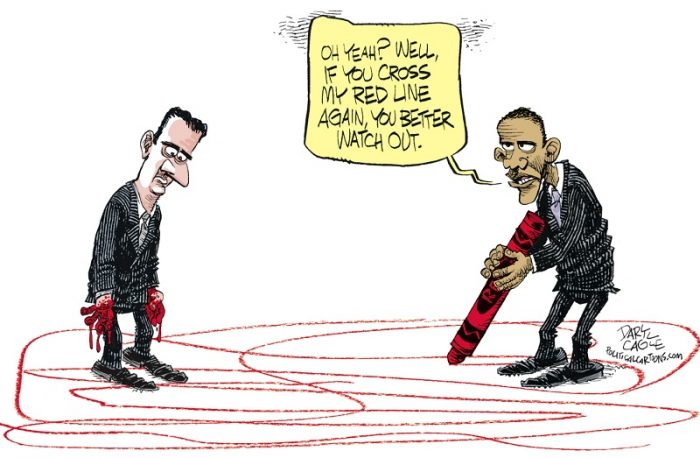 December 7, 2012 10:44 pm 0
Khamenei Fights to the Last Drop of Alawite Blood
Save Christians, Alawites from Clutches of Assad
Why Syria is Going to Get Worse

The day the Assad family detained, tortured, and killed so many Syrians just so it remains in power was the day the Assads sealed their fate and the fate of the strongmen behind the tyranny of the regime. But if Assad uses chemical weapons against Syrians today, he will seal the fate of a whole Alawite community too. In fact, we believe Barack Obama should draw two red lines in Syria.

There is no way in hell Syrians will be of the forgiven kind if Assad doubles down by killing indiscriminately anyone who opposes him using Sarin, VX, or Mustard gas. These are simple facts. We know the mindset of those leading the fight inside Syria today.

The danger does not lie with Assad using the chemicals as much as it lies with Obama whose threats have been shifty at best. Obama’s last threat against Assad that the US would not stand idle if he “moves” or “uses” chemical weapons has recently shifted to only using chemical weapons. What this President does not realize is the weakness he projects when he draws a line in the sand and is compelled to redraw it again every time the enemy steps over the last line he drew.

Meanwhile, Assad believes that no such line exists because he already crossed it with impunity. He now can gas his people knowing well Obama will redraw… again.

If anything, Syrians wished Obama did not make his idle threats. Should he not follow-thru, he opens the door to more sinister consequences. Keeping Assad guessing would have been far more potent if one does not intend to hold the line when pushed and shoved the way Assad has done to Obama.

PROTECT CIVILIANS ON BOTH SIDES

Rebel forces are moving into the Latakya region, a stronghold of the Alawites in the Sahel region. The regime may have moved the chemicals to protect its turf in Latakya and surrounding mountains. Therefore, it is important that Obama, in order to avert the use of chemicals, sends as strong a signal to the rebels not to attack the Sahel region. The Alawites must know that their back is not against the wall and that a solution will develop eventually to co-exist in harmony. Obama should draw two red lines.

However, if Assad intends to use his WMD against the rebels or the civilians, then we believe the Sahel region will be in danger. All those weapons collected from so many military bases, all those tanks, heavy artillery, grenade launchers, cannons, sniper rifles, and even captured MIG jets would all turn against Latakya, Tartous, and Banyas, in addition to Kerdaha the birthplace of the Assads. Who will stop the rebels? US forces dispatched by Obama?

Wiser minds must prevail today. It starts by Obama drawing two final red lines for both the Assad regime not to use WMD and the rebels not to attack the Sahel. Short of that, we may lose control of Syria all together.