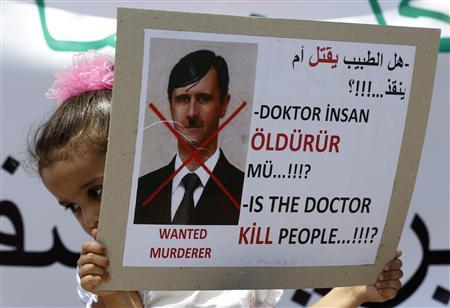 Following setbacks for the Criminal of Damascus Bashar Al-Assad, most recently Syrian rebels taking control of a strategic military base close to Dera’a, the Syrian government has announced a monthly bonus of 37 US dollars (10,000 Syrian Pounds) and one hot meal a day for soldiers fighting on the front lines.

This is something that is taking place at a time when Assad’s forces have been driven back and have lost important territory over the past two months in a number of locations across the country; while Syria’s armed opposition on the ground has also begun to increase the pace of its operations against Assad forces in other areas. Despite a desperate Assad increasingly relying on Iraqi, Afghani and Iranian mercenary forces in the fight and the official statements from Iran backing Assad’s rule, his forces are continuing to lose ground. At the same time, we have heard Western officials, and particularly following the latest G7 summit in Germany, expressing optimism regarding the prospects of a political deal. One Reuters report even quoted some officials as saying that there is now a “window of opportunity” for a political deal that would see Assad step down to give way to a new coalition government in the country. The Reuters report quoted an unnamed official as saying that Assad appears to be “increasingly on the defense after setbacks for his army.” While another G7 source, in the same report, said: “This could be the opportunity to get a political deal,” adding that “we need Russia for this.”

That is all well and good, but is Russia willing to make concessions and accept Assad stepping down? What about Iran? The reality of the situation today is that anything could happen, but what is happening on the ground, and the victories of Syria’s armed opposition, will make up the difference in the end, particularly if the price of defending Assad is thirty seven dollars a month.

So, the situation on the ground, and successive victories by Syria’s armed opposition against Assad forces, will be the deciding factor and push the West to take action and prepare for the post-Assad period. We must not forget that the international community is keeping a very close eye on what is happening in Syria via the US-led international coalition which, just days ago, carried out airstrikes against Islamic State of Iraq and Syria (ISIS) targets in Aleppo. This is the first time that US-led airstrikes have directly aided rival rebel groups in Syria, including the Al-Qaeda loyalist Al-Nusra Front, according to the Syrian Observatory for Human Rights.

So it is the advances of Syria’s armed opposition, along with Assad’s successive losses and retreat, that could lead to real change, rather than the political deals and negotiations that have been talked about and backed by the West over the past four years and which only served to exacerbate and complicate the Syrian crisis. Everybody now is racing to keep pace with the developments on the ground and prepare for the post-Assad period after a long period of neglect and disregard. So, we see some people increasing their attacks on Assad, while others are remaining silent, or issuing meaningless statements. Everybody now is in a race against time, and particularly Assad.

Why Syria is Going to Get Worse
One Reason We Can’t Win Our Freedom
One Syria for All, All Syrians for One
Assad Genocide 427 Syria News 1210 Syrian Revolution 1352