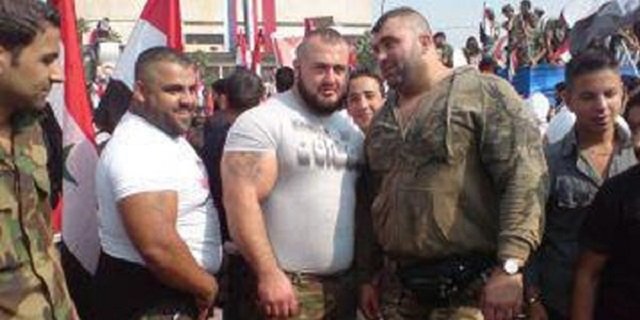 The Alawites of Syria Have Committed to Israel Destruction

December 31, 2015 8:03 am 0
Syria Real War Will Start After Assad
Why Syria is Going to Get Worse
Aleppo is Costing Too Many Alawite Lives

The Alawites of Syria have committed to Israel destruction because they have yielded to full Iranian control and to embracing the Iranian political goals in the region.

Israel, whether Barack Obama likes it or not, fights against it or not, will always be America’s best ally in the Middle East. Not only because Israel embraces a vibrant democracy, but also because Israeli goals fluidly carve similar path with regard to advancement of humanity as the United States does. Most, if not all, Arab countries miss this symbiotic relevance.

An article by Joyce Karam, Chief Bureau for al-Hayat newspaper, which is owned by Prince Khalid bin Sultan of Saudi Arabia, wrote a good article about Iranian plans for Syria whether Assad remains in power or is deposed.  The article provides an insight into the strategic planning Iran has committed to in Syria the people of the Levant should prepare for.

“… Tehran is putting in place new nonstate military structures that would protect these interests should Assad fall. Iran, according to Reuters, has established a massive Alawite force (Assad’s ruling minority) that numbers over 200,000 men, and has recruited Shia fighters from as close as Iraq and as far as Afghanistan to carry out its fight.”

Syria is important for the Mullahs for two reasons: 1) Syria extends the Shiite crescent up to the Mediterranean and, 2) Syria expands Iranian accessibility to their nemesis Israel by opening a new front in the Golan Heights. Something that is already under way, which prompted Israel to protect herself by assassinating Jihad Mughnieyh and Samir Kuntar. Both were working diligently for Hezbollah to find holes in Israel defenses on the Golan.

An army of 200,000 Alawites militarized to serve Iranian interests creates a dilemma for those who embrace the protection of minorities in the Middle East. Minorities, in general, like the Druze and the Kurds, have either been neutral or have committed to working with the US and her allies. They both deserve US protection. But when one minority group commits itself to the destruction of Israel and to threatening the Gulf countries by becoming a proxy to a dangerous enemy, the choice of what to do is clear.

If the Alawites of Syria have committed to Israel destruction, which appears to be the case, then any military decisions considered today by the United States that may yield a negative outcome to our allies must assume that the Alawites of Syria, as secular as they are, have become a tool of Islamic terror. Confronting the Alawites should be no less violent than confronting al-Qaeda, ISIS, or the IRGC.

On one side, we have AQ and ISIS in Syria, and on the other, Hezbollah and this new Alawite force. From every strategic perspective, Assad remaining in power means the war will continue to rage for a long time. Hezbollah is already exhausted and many of its fighters are refusing to fight in Syria. Next to step from the dugout might be the Alawites Iran is training, which is the reason why the war will not stop because the United States cannot afford to let Iran build another Hezbollah in Syria.

So while John Kerry is being suckered to find peace in Syria, his periphery vision has been blinded by his diplomatic efforts to appease Iran. Our Secretary of State misses the big picture because he considers another Hezbollah in Syria a natural evolutionary process in line with his Iran Deal negotiations and capitulation. Useful idiots do serve a good purpose.

America and the enemies of Iran in the region do not and will not let Iran build another Hezbollah in Syria. The idiot Assad in power is serving their real strategic purpose by delivering a stillborn Syrian Hezbollah.

The Alawites of Syria Have Committed to Israel Destruction

Will Alawite Mothers Save Syria?
One Syria for All, All Syrians for One
If the Alawites Want the Assads, They Could Have Them
Iranian Terror 594