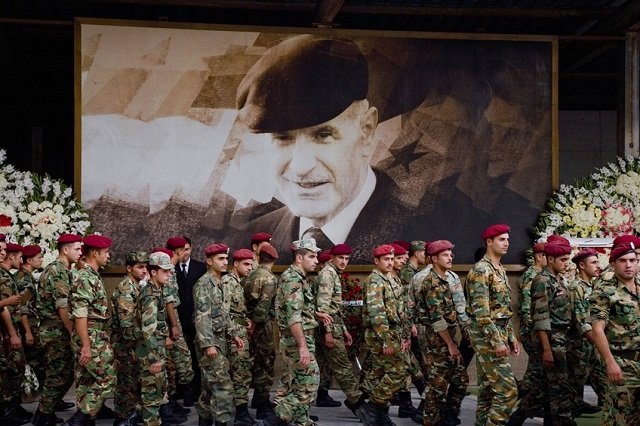 October 22, 2015 10:48 pm 0
Syria Real War Will Start After Assad
Has the US selected an Assad secret alternative?
More Like a Genocide than a Civil War

Sulmiyeh, a small town north of Hama, buried 20 of its residents in a 48 hours period who succumbed while on the offensive against rebel battalion forces. The deceased were all members of the NDF or what we call “Shabeeha” in colloquial Syrian.Â One town buries 20 Alawites fighters in 48 hours.

Six were killed Wednesday and fourteen more bodies arrived to the town’s hospital on Thursday.

Local media announced that four of the NDF thugs died as a result of an IED roadside attack. which was planted on the road between Sulmiyeh and the village of Uthria in east of Hama on a road where the fiercest battles have been raging. The road leads to Aleppo in the north.

The buried were Firas Ward, Ali Mikdad, Talal Darwich, and Asa’ad al-Arnaji whose funerals were attended by the NDF leadership and regime figures from Hama.

Two days earlier, two members of the NDF militias also succumbed to a roadside IED. Their bodies remained on the road for two days before the regime was able to retrieve them and deliver them to Sulmiyeh. Both Alawite cadavers were identified as Ismail Hajj and Hadi Ali Shaheen.

Further local media confirmed on Thursday the arrival of fourteen more dead Alawites militia thugs, also members of the NDF cadres, to the city hospital at Sulmiyeh. They perished Wednesday night as they fought the Jaish al-Fateh rebels supported by Saudi Arabia, Turkey, and Qatar.

One town buries 20 Alawites fighters in 48 hours, which shows how fierce the battles have been with no considerable advances by the Assad regime in spite of the Russian air strikes.

All died east of Hama and in Sahl al-Ghab, a plain that directly connects the rebel positions to the Assad enclave in Latakia.Â Some of those killed were burned alive inside three tanks the rebels destroyed using the TOW missile.

No word on the Jaish al-Fateh casualties from rebel sources.

Late Thursday, two more casualties were also recorded in the ranks of the NDF as a result of sniper fire delivered by the Free Syrian Army “Pride Rally” battalion considered part of the moderate forces battling the Assad regime, Iran, Hezbollah, and now Russia.