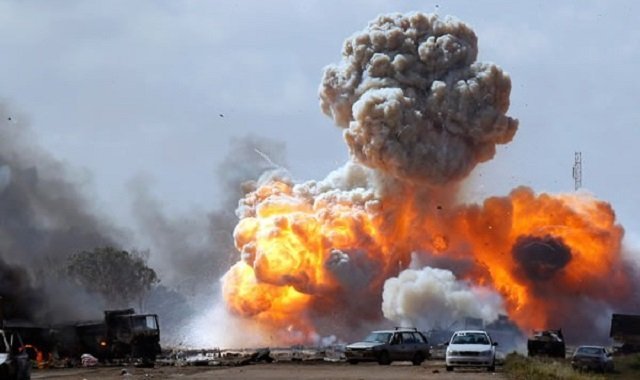 Obama Ignores Killing of Civilians or Kills Them Himself

U.S.-led airstrikes targeting the Islamic State group in Iraq and Syria have likely killed at least 459 civilians over the past year, a report by an independent monitoring group said Monday.

The report by Airwars, a project aimed at tracking the international airstrikes targeting the extremists, said it believed 57 specific strikes killed civilians and caused 48 suspected “friendly fire” deaths. It said the strikes have killed more than 15,000 Islamic State militants.

While Airwars noted the difficulty of verifying information in territory held by the IS group, which has kidnapped and killed journalists and activists, other groups have reported similar casualties from the U.S.-led airstrikes.

In essence, Obama ignores killing of civilians in Syria at the hands of Assad or kills them himself.

“In this context, the present coalition policy of downplaying or denying all claims of noncombatant fatalities makes little sense, and risks handing (the) Islamic State (group) and other forces a powerful propaganda tool.”

Not only Obama ignores killing of civilians in Syria and then kills them himself, he also denies killing civilians.

The U.S. launched airstrikes in Iraq on Aug. 8 and in Syria on Sept. 23 to target the Islamic State group. A coalition of countries later joined to help allied ground forces combat the extremists. To date, the coalition has launched more than 5,800 airstrikes in both countries.

The U.S. has only acknowledged killing two civilians in its strikes: two children who were likely slain during an American airstrike targeting al-Qaida-linked militants in Syria last year. That same strike also wounded two adults, according to an investigation released in May by the U.S. military.

Obama admits killing two civilians when in fact his airstrikes killed 459. How is that for pulling another lie on the whole world, not just America?

U.S. Army Col. Wayne Marotto, a spokesman for the coalition, did not address the report directly, but said “there is no other military in the world that works as hard as we do to be precise.”

“When an allegation of civilian casualties caused by Coalition forces is determined to be credible, we investigate it fully and strive to learn from it so as to avoid recurrence,” he said in a statement emailed to the Associated Press.

Navy Capt. Jeff Davis, a Pentagon spokesman, said the department has seen the press reports on the additional civilian casualties but said the Pentagon will have nothing to say until the reports are reviewed.

Davis said U.S. Central Command has completed four of six investigations into allegations of civilian casualties that have been approved for review so far. In one of those four cases, the military concluded that two innocent civilian children had been killed, and two other people were injured. In the other three, Central Command concluded that the allegations were unfounded.

Investigations into the two other incidents are continuing.

Airwars said it identified the 57 strikes through reporting from “two or more generally credible sources, often with biographical, photographic or video evidence.” The incidents also corresponded to confirmed coalition strikes conducted in the area at that time, it said.

The group is staffed by journalists and describes itself as a “collaborative, not-for-profit transparency project.” It does not offer policy prescriptions.

“The coalition’s war against ISIL has inevitably caused civilian casualties, certainly far more than the two deaths Centcom presently admits to,” the group says on its website.

“Yet it’s also clear that in this same period, many more civilians have been killed by Syrian and Iraqi government forces, by Islamic State and by various rebel and militia groups operating on both sides of the border.”

Not only Barack Obama helped forge ISIS when he ignored to help the moderate forces in Syria, but now he has become the killer of civilian women and children totally in sync with the mass murderer Assad.

We wonder on what wall in his library the faces of the 459 innocent civilians will be posted.

AP contributed to this report

Obama Ignores Killing of Civilians or Kills Them Himself