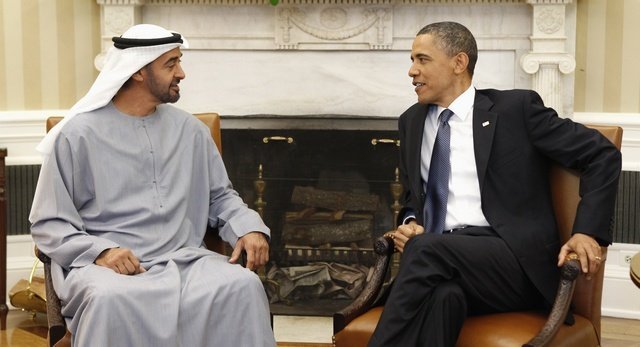 February 5, 2015 4:30 am 0
Is USS Roosevelt in Yemen to intercept Iran or Israel?
Obama is losing it
War of attrition the minorities cannot possibly win

Apparently, one of our coalition partners has suspended its airstrikes against ISIS for lack of rescue resources thus showing our allies mistrust Obama

It seems the Obama White House, which everyone knows approves all military strikes and demands approvals for every sortie and target, has been posting the rescue operations in Iraq far from the theater in Syria.

The distance explains why the US was unable to rescue the Jordanian pilot Muath al-Kasaesebah.

If Obama did little to save our diplomats in Benghazi, how much do you think he did to save the Jordanian pilot? Should we be surprised our allies mistrust Obama?

As Bret Stephens said in one of his WSJ Op-Ed “Barack Obama collects hard favors from allies and repays them with neglect and derision”.

Here is the full article published by NBC News.

The United Arab Emirates has suspended all combat air missions over Syria because U.S. search-and-rescue teams were unable to reach and rescue a Jordanian pilot who was burned to death in an ISIS video released this week, senior U.S. defense and military officials told NBC News on Wednesday.

The pilot, Lt. Muath al Kasasbeh, was on a bombing run over Syria in December when he was forced to eject near Raqqa, ISIS’ self-proclaimed capital. It wasn’t clear Wednesday whether search-and-rescue assets were in the immediate area when Kasasbeh went down, but officials told NBC News that he was captured so quickly — “within minutes” — that a rescue wouldn’t have been possible.

The UAE is part of a coalition with Jordan, Bahrain and Saudi Arabia that has conducted 79 airstrikes in Syria. U.S. officials said the UAE military would not resume its combat flights until search-and-rescue teams assets in northern Iraq — which could include combat air cover, helicopters and Osprey tilt-rotor helicopters — are moved closer to Syria.