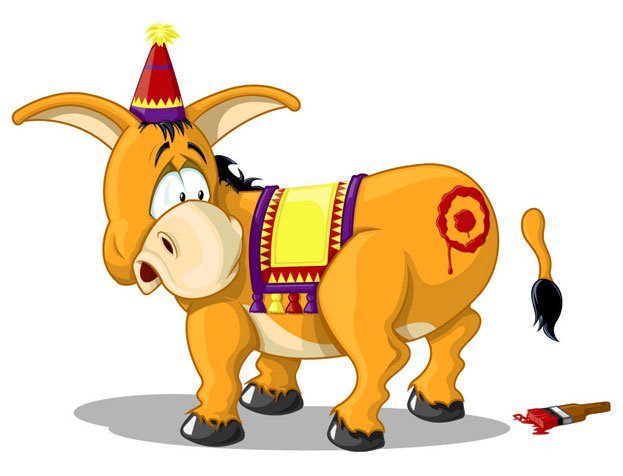 If any of my informed friends asked me to describe John Kerry in six words or less, I would suggest “Pin the Tail on a Donkey”.

This description fits him like a glove because Kerry is usually blind, he is usually spun around like a child by our enemies, and he could never find a donkey let alone find a way to keep this country safe from terror.

True, he inherited Syria from Hillary Clinton. However, even truer that he, along with every White House resident or staffer involved in Syria, have screwed-up Syria beyond belief. This includes the genius Ben Rhodes.

It is almost a certainty Obama and Kerry get enough daily intelligence to suggest their screw-up; intelligence that point to two important milestones that got us to fear a new enemy in ISIS.

The first was to abandon the secular Syrian army defectors in 2011 instead of helping them remove and dispose of the Assad regime of terror. The second was in feeding terror by bombing ISIS, but not the Assad forces, which, for the Arab street, looked like the US was striking Sunni terror but letting Shia terror run amok killing Sunni women and children.

Only an ignorant administration, out of touch with real facts and a real sense of history, would commit such grave errors.

Now comes another error that I believe will make ISIS a permanent fixture and a permanent threat to US interests for a long time to come. This decision by Obama and Kerry may also grow the Islamic State to form regional cantons across many Muslim lands.

A New York Times article aptly titled “U.S. Signals Shift on How to End Syrian Civil War” gives plenty of hints of how incompetent John Kerry truly is. The article exposes what has always been known to the American-Syrian opposition: John Kerry is Assad’s best friend in the US. No one protects the Assad interests like John Kerry does.

He [Kerry] made no call for Mr. Assad’s resignation, a notable omission for Mr. Kerry, who has typically insisted on it in public remarks. Instead, he spoke of Mr. Assad as a leader who needed to change his policies.

Do not take “insisted on it in public remarks” too seriously. Kerry had no choice but to take a public stand against Assad for his crimes against humanity. Otherwise, Kerry would have looked like a buffoon.

The article then quotes Kerry directly making the following statement:

“It is time for President Assad, the Assad regime, to put their people first and to think about the consequences of their actions, which are attracting more and more terrorists to Syria, basically because of their efforts to remove Assad”

I have three wonderful, slap-in-the-face direct comments to make here.

On one side, both Obama and Kerry refuse to call terror by its name and on the other side both Obama and Kerry empower and feed the Assad terror machine and the ISIS terror with their preposterous policies. Maybe someone can explain this logic to me because I honestly do not get it.

The article then captures a glimpse of the tone of this Blog by exposing the views of the secular Syrian opposition that was fighting on the ground.

Tarek Fares, a secular Syrian Army defector who long fought with the loose-knit nationalist groups known as the Free Syrian Army but who has lately quit fighting, joked bitterly about American policy one recent night in Antakya, Turkey.

This is how the Americans talk. They say, ‘We have a red line, we will support you, we will arm you.’ They do nothing, and then after four years they tell you Assad is the best option.”

Even the secular Syrian opposition dislikes US policies.

Imagine then why and how ISIS keeps growing.