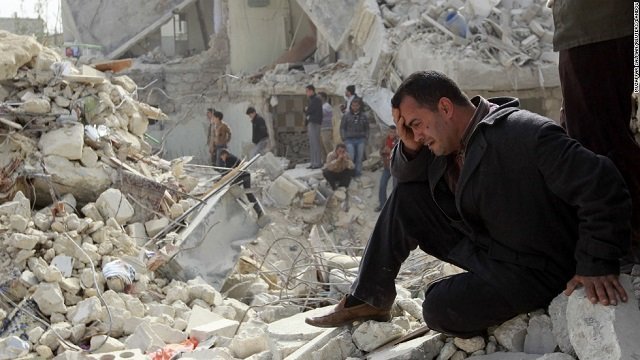 July 2, 2015 7:56 pm 0
Rifts in the Arab League Caused by Three Club Members, Two Observers, and One Syrian Dissident
You Think Obama Did Not Know This Was Going to Happen?
Falafel Witnesses Assad Calling Obama

From the perspective of any Syrian, whether they support the Assad regime or the Syrian rebels trying to overthrow him, the Syrian civil war is the worst case scenario for him/her no matter their affiliations or political motives.

No Syrian wants to witness the destruction of his/her country. This is why we shudder when we recall the Alawites in Tartous in 2011 chanting, “Assad, or we set the country on fire”. In Arabic, it rhymes perfectly, “Assad, aw nihrek al-balad”.

There are Syria’s civil war positive notes we never seem to explore enough or talk about because the dark side of a ravaging war killing the innocent and the young takes precedence.

For example, one of Syria’s civil war positive notes is the fact there has been more Syrian dissidents, more rebel moderate factions, and more individual opposition leaders who became convinced that opening a dialogue with Israel helps Syria in the long-term. Many did just that. Here at TFS, we know of many positive exchanges between the Israeli Government and the moderate rebels.

In our opinion, the war has forced previously blinded people to see the light, especially when they see Assad kill civilians indiscriminately and Israel goes out of its way to treat the Syrian injured. Syrians have realized, for the first time, there is a heart beating in the Israeli people they see through their kindness and charity. They also are becoming convinced that peace with Israel means peace in Syria.

Another one of Syria’s civil war positive notes is Assad’s very narrow capacity to “form” terror groups to terrorize the region. We believe ISIS was his last. Most of the regime’s inner circle have either died, been killed, or sidelined. Furthermore, Assad no longer possesses the financial capability, the free hand, or the institutions to start another terror project. His regime is exhausted, his troops depleted, and his hold on power is pitiful at best.

The same does not apply to Iran now in total control of Damascus. If Iran starts a new terror project, please write:

Our president is willing to release billions of dollars to a regime of terror. No need to guess where most of the funds will go.

There are many more to Syria’s civil war positive notes that each Syrian sees them from his/her own perspective.

The important thing is that Syrians are beginning to explore political differences to engage with Israel, and Assad’s wings of terror have been clipped.

Now, all we need is to defeat ISIS in order to stop Assad from reminding us who the alternative to his regime is.

I get it now, Assad is protected to torture Israelis
At least 16 dead as Syrian school hit in air strike
ISIS using cluster ammunition in Syria
Syria News 1213 Syrian Revolution 1335