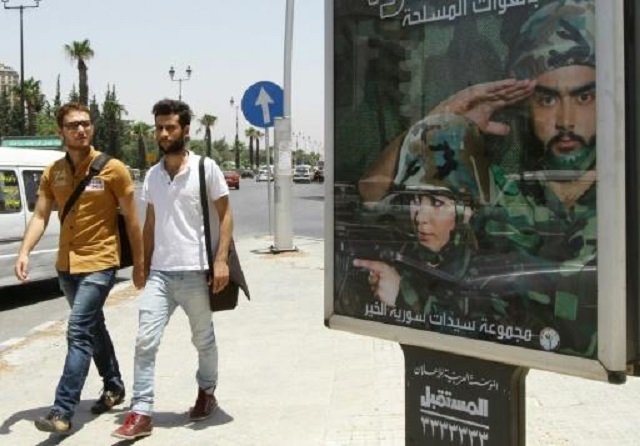 July 2, 2015 4:29 pm 0
Attack Obama’s anti-Semitism
Diplomatic Solution for Syria is Impossible Without Assad on Trial
Will Alawite Mothers Save Syria?

With Assad army collapsing and depleted by casualties and rampant draft-dodging, a new campaign in the war-torn country is urging citizens to enlist.

In recent weeks, billboards have sprung up across Damascus reading “Join the army,” “We are all the army,” and “With our army, we’ll win our country.”

The campaign is the work of a pro-government organization known as the “Syrian Women’s Group for Good Deeds,” which includes mothers and daughters of Syrian soldiers.

One billboard shows two soldiers in fatigues, a man saluting and a woman pointing, under the phrases: “Our army means us” and “Join the army.”

Another shows a soldier in uniform next to a smiling girl with her hand raised in a victory sign.

More than 80,000 soldiers and other pro-regime fighters have been killed in the four-year conflict, out of a total of roughly 230,000 dead.

And many Syrians, even those who support the regime, have been reluctant to show up for mandatory two-year military service, with up to 70,000 failing to enlist, according to activists.

The combination of casualties, defections, and draft-dodging has seen the country’s 300,000-strong military halved in size since the conflict began in March 2011, according to experts.

‘They don’t come back”

Last week, as part of efforts to convince people to serve, Prime Minister Wael Halaqi announced that, from July, soldiers at the front would receive monthly bonuses of 10,000 Syrian pounds ($33.50/30.18 euros) as well as an extra hot meal each day.

One extra hot meal a day to die for the Assad family. How generous!

A security source said the measures have been ordered by Assad himself.

Last year, the law was amended to guarantee that public sector employees who left to do their military service would still have their jobs when they returned. Most did not return though.

Witnesses told AFP that, in recent days, armed security personnel had raided several districts in Damascus in search of military-aged men. The Assad army collapsing is forcing Assad to resort to force.

Some men have paid smugglers to help them leave the country in order to avoid conscription.

“I can’t go to military service,” said Sam, 29, an engineer from Homs living in Damascus.

“These days, those who go the army don’t come back.”

With Assad army collapsing, smart Sam is right to dodge.

The Face, The Muscle, and the Brain
Is Obama wagging the dog?
Another Setback for Assad Forces in Syria. Are Gas Attacks Next?
Syrian Revolution 1335