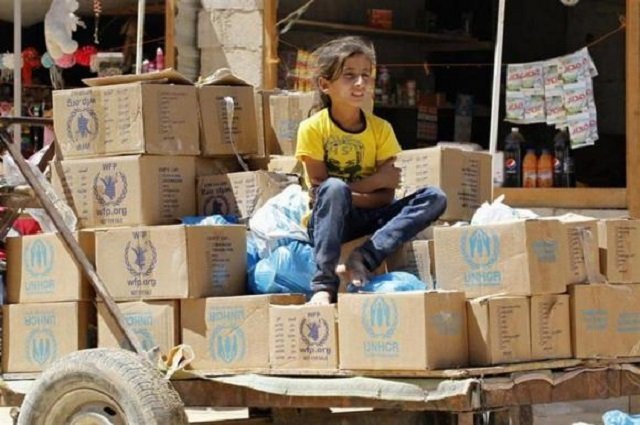 July 2, 2015 10:42 am 0
Assad made beggars out of his people
Once Upon an Arab League
Syria’s Neighbors Plan Occupation of Syria

How does one kill more Syrian refugees? The World Food Program said Wednesday it had to cut food aid for Syrian refugees in Lebanon in half because of a funding crisis and may soon have to halt all food support for most refugees in Jordan.

To starve and kill more Syrian refugees, all you have to do is ignore them. This is how helpless Syrians have become.

Lebanon and Jordan are among five countries that host some 4 million Syrian war refugees. The U.N. refugee agency warned last week that with the Syria conflict in its fifth year, funding levels for refugee aid programs dropped to a dangerous low in 2015.

Many refugee families have been struggling to get buy, and cuts in food aid are having a devastating effect, said Joelle Eid, spokeswoman for the WFP in Amman.

The WFP, which had to reduce food aid in the past because of the cash crisis, said that in July refugee food aid in Lebanon is being cut in half, to $13.50 per person per month.

How does one starve and kill more Syrian refugees? Just pretend they do not exist.

About 440,000 refugees in Jordan who live outside refugee camps and currently receive food aid are escaping cuts this month, but could be left empty-handed if funds don’t arrive by August, Eid said.

The WFP said it needs $139 million to continue helping Syrian refugees in the region through September.

Maybe Mr. Obama ought to pay WFP from Iranian frozen funds. After all, without Iran interfering in Syria’s civil war, the suffering of the Syrian people would have long ended.