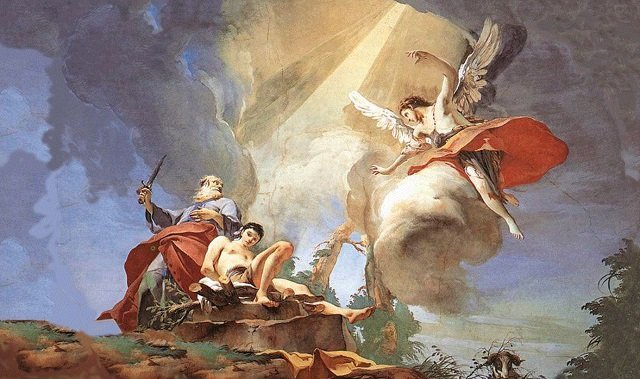 Iran Deal Is Genesis 22 for the Democrats in Congress

Americans have voted for an anti-American president. This reality is dawning on millions of betrayed voters the majority of whom are searing with regrets.

In the matter of the Iran deal, there are two elements that show clearly Obama’s anti-Americanism.

The first one is yielding to Iran to develop its own ballistic technology, after he lied about it, which is able to reach our shores with “death to America” warheads, and the second are the secret side deals Obama concocted between Iran and the IAEA that keeps America in the dark when it comes to Iran’s development of its nuclear past program and future inspections.

Neither of those two supposedly negotiated or planned elements are sitting well with Congress on both sides of the isle. Republicans are seething with anger and Democrats are embarrassed and sweating bullets to be voting for a historic agreement that may not only bite America down the road, but which will not be well received by their constituents. The memory of their losses in the 2014 mid-term elections have not faded away yet.

All Democratic legislators know their own legacies are at stake with how they vote for the Iran deal. In fact, we believe this Iran deal is Genesis 22 for the Democrats in Congress who are about to vote on it.

Some Democrats may be realizing that their legacies is a reminder of Genesis 22 where Abraham is ordered to sacrifice his own son. With his Iran deal, Obama is ordering the Democrats “Here take your legacies, your only legacies, that you love, and go down the roll call. sacrifice them as a burnt offering on the Capital Hill.”

Obama is asking the Democrats to burn their legacies to save his; all constructed on a whim of anti-American sentiments that enables our enemies. The Iran Deal is Genesis 22 for the Democrats in Congress.

The Iran Deal is a bag of dirty tricks like no other in America’s history. Americans are asked to vote on a deal whose one part is horribly bad and whose other part is totally secretive. For those of us who love this country, learn how its haters construct its demise.

The Iran deal is Genesis 22 for the Democrats in Congress. Their president is asking them to burn their legacies for his. The problem is that no one is going to blame Obama down the road because of his anti-Americanism. However, everyone will blame those Democrats who love their country but decided instead to burn their legacies to follow a man whose loyalties are dubious.

No man is worth America’s safety and security. Certainly not the god that he thinks he is.

Send Obama back to the negotiations table to negotiate a better Iran deal.

Iran Deal Is Genesis 22 for the Democrats in Congress