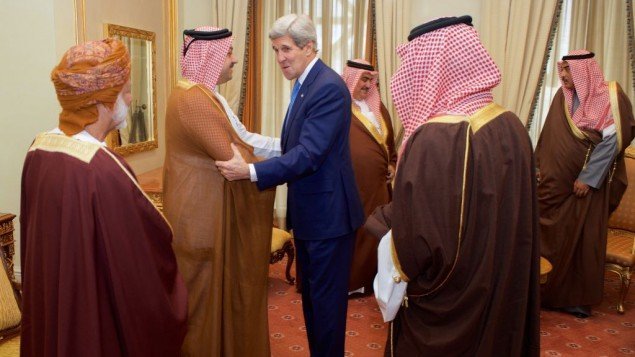 After the Iran Deal, Obama Continues to Harm U.S. Allies

After the Iran deal, there is a two-prong effort underway, sponsored by President Barack Obama, to stop the wars in Syria and Yemen simultaneously by providing Iran with more advantageous strategic positions to harm U.S. allies.

Secretary John Kerry is meeting today with the GCC countries to discuss a variety of issues, one of which may be another Russian proposal to trade Yemen for Syria between the two foes Saudi Arabia and Iran.

The proposal, suggested after the Iran deal, may go along these lines. In return for Iran abandoning the Houthis in Yemen, Saudi Arabia would abandon the rebels in Syria and turn on them to fight, side-by-side with the Assad regime, the extremists of Jabhat al-Nusra, ISIS, and Ahrar al-Sham. Since Obama permitted Assad to kill as many moderates in Syria, this plan means the only man standing will be a mass murderer with chemical weapons in his possession.

Barack Obama gave us a hint of this proposal when he said last month that “Iran is one of those players, and I think that it’s important for them to be part of that conversation,” This was a 180 reversal from where the United States stood on Iranian hegemony in Syria.

To understand how this proposal harms Israel, for example, read Jackson Diehl Op-Ed in the Washington Post.

Diehl explains the contradictions between Obama’s rhetoric and actions.

During the same press conference, Barack Obama said, “It is in the national security interest of the United States to prevent Iran from sending weapons to Hezbollah,”, yet, Obama’s plans for Syria fling the door wide open for Iran to send more missiles to Hezbollah unhindered.

There is no good reason for Saudi Arabia to relinquish its support of the rebels in Syria. The U.S. and Iran are striking ISIS in Syria and Iraq; more importantly, Saudi Arabia has starved the Houthis of Iranian weapons by choking all the entry points previously used by Iran.

Simply stated, Saudi Arabia is winning in Yemen. It does not need to trade, after the Iran deal, because it knows Obama continues to harm U.S. allies with his Iranian support.

Furthermore, Israel is not going to sit idle and let Susan Rice and Ben Rhodes threaten its borders by letting Iran control Syria. With that control, Iran is able to open three fronts against Israel simultaneously from Gaza, Lebanon, and now the Golan Heights.

After the Iran deal, it is obvious to us that Barack Obama continues making it easier for Iran to open all three fronts while he claims his goal is the opposite.

We believe Barack Obama is intent on harming Israel even if it means protecting a mass murderer in Damascus and the killing of countless number of innocent civilians in Syria. No matter how much facts we cite to support our logic, it seems people are afraid to confront Obama heads-on on this issue for fear he may retaliate with the immense powers at his disposal.

We will have to wait until he is harmlessly out of office before it pours dogs and cats on his head.

Meanwhile, Saudi Arabia and the GCC countries should refuse any deal that expands Iranian control over the region no matter the costs. After the Iran deal, the GCC should do all they can to resist any Obama/Putin proposals.

Obama, like Putin, has proved he is no friend of the Arab countries or Israel.

After the Iran Deal, Obama Continues to Harm U.S. Allies