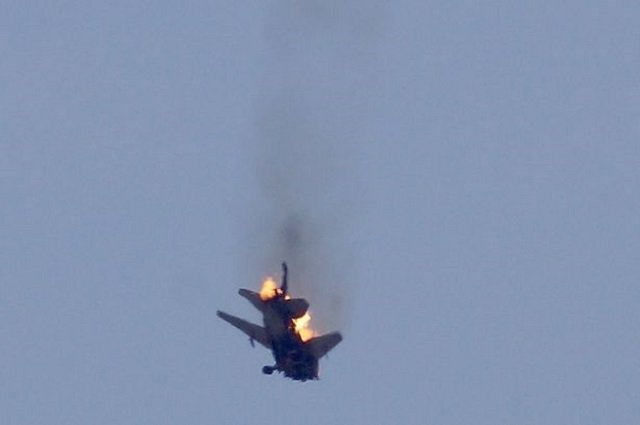 At least 27 people were killed and dozens injured when a Syrian army fighter jet crashed into a busy marketplace in the rebel-held northwestern town of Ariha on Monday, residents and witnesses said (See video of Syrian jet crash aftermath below).

Most of the dead were civilians on the ground in the Idlib provincial town that fell to a coalition of Islamist insurgents in May.

Scores were also injured, according to activists on  the ground and witnesses. There was no immediate reaction from the Syrian army.

The military plane had dropped a bomb in the heart of the city center main commercial street where shopkeepers open in the early morning before crashing in the middle of the marketplace, two witnesses told Reuters.

“The plane had dropped a bomb on the main Bazaar street at low altitude only seconds before it crashed,” said Ghazal Abdullah, a resident who was close to the incident.

It was unclear whether it was shot down.

Ariha’s fall had left the insurgents in control of most of Idlib province, which borders Turkey and neighbors Latakia, the heartland of Assad’s Alawite sect, on the Mediterranean coast.

Most of the rich agricultural region, however, has since come under heavy aerial bombardment by Assad’s forces in a counter-offensive to regain lost ground.

The army has fought back using heavy air strikes to beat back insurgent advances into the mountains of Latakia province that brought them closer to government-held coastal areas north of the capital Damascus.

Syria’s western flank, fringing both the Mediterranean coast and the Lebanese border, contains Syria’s major cities including Damascus and is seen as crucial for Assad’s hold on power.