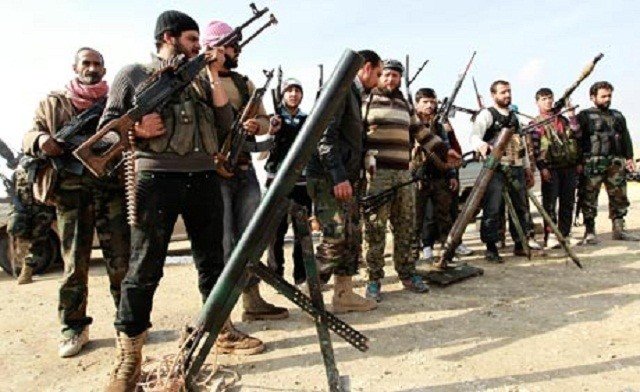 Let them kill each other

I recall a day when pundits, in the early stages of the Syrian civil war, when the rebels were not yet tainted with the blood of terrorism, calling upon the world for Syrians to ?kill each other?.

The head of the IRGC met with PM Nouri al-Maliki and Iran has quickly deployed its IRGC to defend Iraq. If the US assist Iraq, the perception will be that the US is siding with the IRGC against ISIS, the way it sided with Assad against the Syrian rebels from the get go. The perception would be the US is assisting Shia extremism against Syrian Sunnis not yet turned extremists.

As wrong as this perception may be, we are dealing with the Middle East here. How the Sunni masses perceive the US and the IRGC, simultaneously, coming to Iraq?s assistance to defeat ISIS, should matter to the US.

Everyone?s feathers are ruffled when they see Sunni terror exact a toll because of our memory of 9/11 and its savagery against Americans; rightfully so, we all should be outraged. However, the US must be alarmed if Arab Sunnis ask, ?Where was the reactive US outrage when IRGC forces were barrel bombing Syrian civilians by the thousands?? or ?Where are the US weapons to protect Syrians from the terror of the IRGC, Assad, and the Mullahs of Iran??

If the intent is to drive the threat of terror, then by all means, protect Iraq from ISIS the same way the US protected Assad by depriving Syrian rebels of weapons, which indirectly protected Assad. With the US rushing to Iraq with weapons, the US would be closing the circle of the perception of Arab masses.

If any Arab Sunni asks these questions, the US has an unstoppable war on its hands that will spill beyond a sectarian regional conflict to a worldwide Islam against Christendom. It is the perfect recipe for an unstoppable drive to join ISIS.

This White House is truly out of its league.

The shortsightedness of the ?Let them kill each other? led to the Iraq of today. US dispatching weapons to Iraq so quickly and so openly is not, judging from the comments on Arab websites, sitting well with many Sunni Arabs.

Who in their own right mind expect uncontrollable Sunni masses in the region not to join the battle with ISIS? The US could not have done a better job if the Pentagon was tasked with turning the Sunni savages and the Shia barbarians on each other.

If the US helps Iraq, the conflict will grow exponentially. Now, we have no choice but to ?Let them kill each other?. We should all thank Mr. Obama and those pundits who called for this notion.

This White House is losing control faster than a burst pipe loses water.