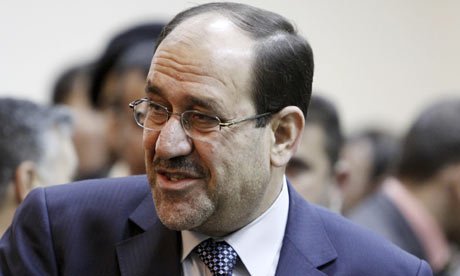 No help for Iraq

June 13, 2014 8:28 pm 0
Obama Stands Blameless for a New Class of Extremists in Syria
A Virus with a Hijab
Is Assad Recruiting al-Qaeda Again?

Does anyone really care if the ISIS terrorists kill the IRGC terrorists now squarely in Iraq helping the notorious al-Maliki?

Or if the Assad terrorists kill the Jabhat al-Nusra terrorists or vice-versa? I, for one, do not give a damn.

So hide your feelings, contain your emotions, and mask your bias.

We all should root for the eradication of religious extremism in pursuit of denying others their rights. As the Iran regime denies Syrians the right for freedom from the terror of Assad, we should deny the Iranian regime the right to be free from the stinking stew of ISIS.

ISIS priorities are the Assad regime, the IRGC, Hezbollah, the al-Maliki Government, the Christian minorities in the region, Israel, and the United States. Exactly in that order. The minorities before Israel and the US because they are easier targets.

Before ISIS gets to Israel and the US, ISIS has to go through Assad, the IRGC, Hezbollah, and Nouri’s bank account. We should all start worrying after two-thirds of the IRGC and Hezbollah forces have been decimated. Before that would be as premature as celebrating a birth on a wedding day.

Iraq was lost to the extremists the day US forces failed to remove the Iranian regime after repeated IED attacks against our troops. Anyone who believes Iraq could be saved today is asleep at the helm.

Let the Iraqis solve their own problems the way we left the Syrians solve theirs. Moreover, please no panic when Bahrain and Eastern Saudi Arabia erupt next.

We still have 27 years to go in Islam?s 30-year cleansing war.

Homs is Burning because It’s not the Strait of Hormuz
Jihadism on Steroids
Is Assad preparing for dismissal of his crimes?
Radicalism 567