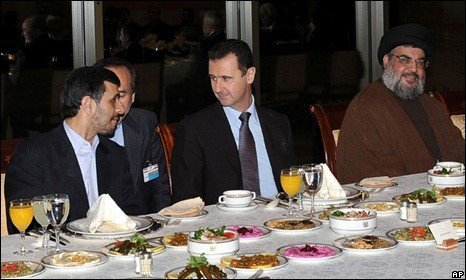 The factories of terror

In February of 2010, a photo of Assad, Ahmadinejad, and Nasrallah dining victoriously in Damascus had a chilling effect on the region. Who could miss that coy smile of Nasrallah who appeared from his bunker to insult the world? A week earlier, Mr. Obama appointed a new envoy to Damascus in an attempt at improving relations in the aftermath of our war in Iraq. The victory dinner was the culmination of some seven years of the trio battling US forces in Iraq by celebrating terror.

None of the three terror masters knew at the time that a year later, Assad would begin to lose control over Syria, Iran would begin to send its IRGC to battle civilians and defectors, followed by Hezbollah dispatching its best battle-tested fighters to die in a conflict that quickly turned sectarian. The civil religious war in Syria erupted on March 15, 2011 and with it the beginning of the end of the Assad regime.

It is almost a certainty Nasrallah is smiling no more. Especially after you consider the latest WSJ article detailing the losses Hezbollah continues to suffer fighting for Assad. When the hidden cost of despotism manifests itself openly, as it did in Syria, the results could be devastating for regimes that survive by eliciting fear and spreading lies. Eventually, those lies catch-up with them and the emperor stands naked for the world to mock. Does anyone remember the infamous ?reformer? label uttered by our former Secretary of State Hillary Clinton to describe Assad? That barbaric ?reformer? gassed women and children eventually.

To get the West on his side, Assad deployed one of his oldest tricks. The peaceful street demonstrators he was killing mercilessly had an impact on the world public opinion and unless he created ?terrorists? he can claim he is battling to benefit the West, Assad was about to lose it all. During that period, many high officers of his Syrian Army were defecting giving more credibility to the notion that his opponents are as secular and as liberal as he was. Assad needed to act fast.

As Newsweek reported last month, in an article entitled ?How Syria?s Assad Helped Forge ISIS?, the regime released hardened and extremist prisoners without any announcement or fanfare.? These forgotten Muslims, who turned extremists in the prison factories Assad set-up just for that occasion by torturing them, were now free able-bodied men who returned home to see the devastating destruction the regime has exacted upon people and material. Picking-up a gun and a Koran was all Assad could hope for after he released them. According to a defector from his security apparatus mentioned in the same Newsweek article, Assad even organized ISIS and permitted their fighters the space to grow and prosper. While the world paid attention to the mounting civilian casualties, the regime was bombing with deadly missiles, and barrel bombs, and Sarin gas, Assad never attacked ISIS in Deir el-Zor, Qamoshli, and the territories they occupied in Northeast Syria. He needed them to grow in his laboratory to show their lethal capacity to threaten the West otherwise, it was all for naught. In the meantime, Assad hoped his ferocious barbarism will recruit Muslims in the West to join the extremists; and join, they did. Once that happened, Assad secured the very West he threatened, which is now offering him a pair of gloves to hide his blood-soaked hands.

It would be a grave mistake to assume that Assad is the firefighter US intelligence can rely upon to conduct operations on its behalf when the Assad regime is actually a laboratory culturing the very same parasites and microbes harmful to our interests. He hides from us his dungeons in order to produce the culture he needs to demonstrate his value. The prisons are hidden but his value as a secular fighting terror is propagandized widely and Western politicians drool over the prospect the problems he created become also his solution, which is also theirs. Our naivet?, in this regard, is limitless because the same politicians who scream bloody hell when they see terror exposed, such as we have seen in Iraq lately with the formation of IS, are not the same politicians who are comforted knowing Assad is ready to resolve a problem. Assad hinders our front lobe with his terror factories and our lower lobe with his quick superman appearance to restore our confidence in him. The formula seems to work every time because in American politics, we can rely upon Vice President Cheney to confront terror and President Obama to let others confront it on our behalf. That Assad produces terror is beside the point because the man wears a western tie, not a turban, or a robe.

Many US politicians are clueless about what Assad is capable of doing to compound the sectarian jam he and his cohorts in Iran and Lebanon painted themselves in when they attacked helpless and innocent Sunni civilians. Some, like Senator Rand Paul, are hitting the airwaves to seek support for the Assad regime in the hope that US troops or treasure will not be in danger of any deployment soon. That an isolationist politician is rendering an opinion on foreign policy detailing what the US can do without the consequences associated with the very nature of isolationism, we all see before us on many fronts in the region, is testimonial to the problematic U turn this nation is taking. Under this administration, the President still refuses to acknowledge and react to the danger America?s enemies are posing if either sides win. His non-committal, non-confrontational approach is feeding the fires of rebellious religious fervor and either extremism, be it Sunni or Shia, is dangerous to America?s interests if it survives the fires burning in the region. Taking sides to protect one from the other is as foolish a policy as it ever is.

No doubt, that once the extremists and the moderate Free Syrian Army finish themselves off, Assad will remain standing on a heap of ruins ready to re-apply the very same tactics that successfully have kept his family in power as agents to the Soviet Union but also as cooperators on intelligence with the CIA. In the meanwhile, his most egregious behavior of threatening America?s strongest allies, like Israel and Saudi Arabia, go mainly unpunished. He is already back to his old tricks feeding Hamas rockets they can use to terrorize the Israeli civilians, promoting the Palestinian Cause to divert away any attention from his factories of terror, and positioning his regime to be the solution to terror to unwitting Western legislatures. The routine reads like a blueprint of a basic structure with two doors; one hidden and one exposed. All Assad has to do is show us the exposed door with his intelligence cooperation against Sunni extremists to forget about the more lethal hidden one that manufactures them.

This time around though, the problem has gotten out of hand. Assad?s worst enemies are the moderates, not the Islamists. The moderates are his alternative while the extremists are his saviors. This is why arming them today to fight the extremists is a loony policy that will keep Assad?s factories of terror churning more extremists he will keep until another conflict erupts against the US and the EU.

Next time around though, he will dispatch them to Europe the way his father dispatched Carlos to kill and terrorize in the seventies. Obama?s mistake of protecting Assad will come back to haunt the US many times over.