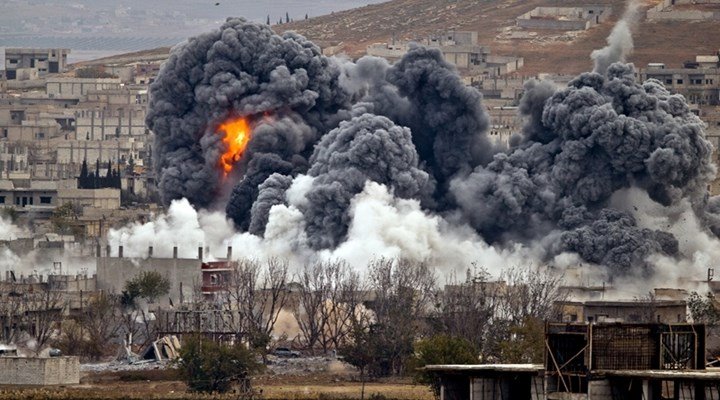 May 7, 2015 1:57 am 0
UPDATED: Assad Barrel Bombs Kill 184 Civilians in Aleppo
World yawns as Syria enters the dark ages
The factories of terror

Responding to a bi-partisan letter that was addressed to Barack Obama by four US Senators asking him to create safe zones to protect civilians in Syria, his defense chief testified in front of a defense appropriations subcommittee on Wednesday that establishing such zones would mean undertaking a “major combat mission”.

Secretary Ashton Carter insisted the US would have to “fight” to create such a plan.

“We have thought this through–how to secure that zone. It’s a difficult thing to contemplate…and challenging.”

The letter addressed by the four Senators asked:

“We urge that the United States work with key allies to establish and enforce one or more humanitarian safe zones in Syria without delay. These zones would provide essential protection for displaced Syrian civilians and a safe transit route for desperately needed humanitarian supplies.”

Here at RPS, we believe Secretary Carter’s remarks are hogwash.

The truth is that Barack Obama does not wish to offend the Iranian Mullahs who are targeting Israelis and Syrians alike with their grotesque terror. Any such plan to protect the Syrian civilian population by the United States would be opposed by Iran; ergo, the president’s spin about its difficulty.

This is not the first time Obama refuses no-fly zones to protect Syrian civilians. France asked him in the past and he refused. So did many countries and world leaders.

What was he supposed to tell them? I want to destroy Israel with Iranian help and I cannot offend them in Syria?

Obama refuses no-fly zones for Syria to help with his other goal; namely, to destroy Israel with Iranian help.

Until Iran signs Obama’s bad deal and in the process accesses billions of dollars in frozen assets and the dismantlement of western sanctions, Obama is not going to lift a finger to offend them.

After the sanctions relief, Obama could always claim that it would be dangerous with Iran fully engaged in Syria to establish any safe zones. He will never be short of excuses.

Either way, Obama is after the Israelis and Syrian women and children are being sent to slaughter to facilitate his grand scheme against the Jews of Israel.

Happy you voted for the unknown Barack Obama or gave him your hard-earned money?