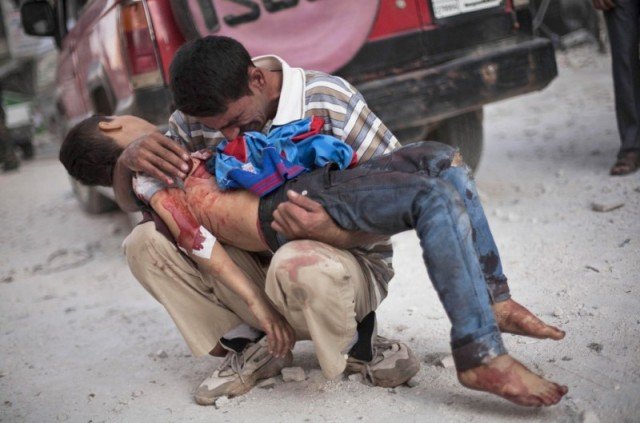 The Kill a Syrian Child travel agency is now open for business.

If you like the psychopath Baschar al-Assad, it is our best and cheapest deal. All you have to do is say you hate Sunni Muslims and the Assad army will let you ride their helicopters to drop a barrel bomb on a school, a hospital, or a market place. Of course, transportation to Syria will still cost you, but the barrel bombs, the helicopter ride, and the in-country transportation are free. It is not illegal to transport you to the front lines of the Assad army, only Hezbollah and IS are off-limits.

To Kill a Syrian Child travel agency is now open for business. Please spread the word.

If you are concerned about the mothers of dead Syrian children, please do not worry. Unlike any normal mother, Syrian mothers don’t feel a thing. When their children are hunted like animals by Putin, Assad, and al-Baghdadi, they are home joyously singing, cooking, and sewing.

If you are more religiously inclined, you are in luck. You can either join Hezbollah or the Islamic State where you will be provided with a heavy artillery piece, courtesy of their God, to kill Syrian children. Read for yourself how it is done when you join the Islamic State. Transportation to Hezbollah or IS front lines is at your own expense and arrangements. We are forbidden by law to transport you to Syria to meet-up with those two terrorist organizations. Don’t let that discourage you though. To “Kill a Syrian Child” is an experience that has no equals.

If you are coming via the United States, we cannot help you. Obama has taken control of the Kill a Syrian Child possibility. Only Obama can kill them because he ignored all the Islamic State warnings by believing IS is a “junior varsity” team. Obama calls killing Syrian children “Collateral Damage”. Can you imagine calling ourselves the “Collateral Damage Travel Agency”? Laughable.

Obama would want you to believe he is a humane president until you ask him to save a Syrian child instead of killing one. This president, whose father is African, will not lift a finger to help anyone. Strange, don’t you think? To originate from a continent with so much need for help, yet grow a heart inside you that could care less about others.

Our travel agency Kill a Syrian Child is open for business

Our motto is: We want to make sure every foreigner kills a Syrian child before he/she dies. So add our name today to your bucket list.

To kick things off, we are offering our first time customers a 20% discount. Applicable only to go kill a Syrian child by any means their heart desires. Let all your family members know about our offer during these joyous and peaceful holidays.

Why go on an African safari and pay heavy fines for killing an animal when you can travel to Syria and kill a real live Syrian child, with no legal consequences, just like Barack Obama?