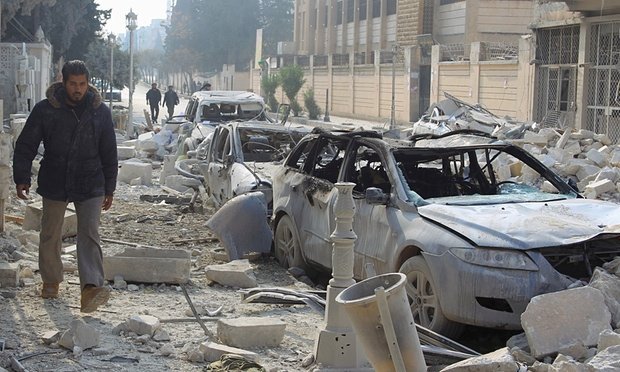 Source: The Guardian – by Martin Chulov and Kareem Shaheen (Russia’s airstrikes on Syria appear futile with little progress on ground)

The Syrian army is short on troops and has been unable to use Moscow’s highly destructive campaign to its advantage.

When Russia launched an air campaign to support Bashar al-Assad, it was banking on a ground force of Syrian troops to finish what its warplanes started.

However, more than 12 weeks later, Syria’s army and the large numbers of Shia militias that back it have made few meaningful gains on the ground. Meanwhile, Moscow’s jets have added a new layer of carnage, reportedly killing at least 600 Syrian citizens, including 70 in Idlib on Sunday.

In Syria’s north and in opposition-held parts of the cities of Hama and Damascus, the destruction wrought on civilian infrastructure and population centres over the past fortnight is more intense than at any point in almost five years of war, residents of the communities and observers outside Syria say.

Meanwhile, the US has claimed that a once-broad gap with Russia over how to end the war has been narrowing, with both sides last week championing a peace process that aims to defuse a conflict that has killed at least 250,000 people and left Syria in ruins.

On the ground in rebel areas, there is little faith in the process. “Where are these reasonable Russians that Kerry claims are starting to see the light?” said a doctor in an Idlib hospital who was treating casualties, referring to the US secretary of state, John Kerry. “Bashar’s jets never bombed us like the Russians do. Isis never hunted us down like this.”

Damage from airstrikes is intensifying, but the Syrian ground forces are showing few signs of being able to use this to their advantage. With opposition anti-tank rockets taking a heavy toll on regime armour between Hama and Latakia, conscription of military-age males is stepping up across government-held parts of the country in an attempt to boost national forces.

In Damascus, efforts to replenish the army are in full swing. One military-age resident said authorities introduced a campaign two months ago aimed at recruiting tens of thousands of the city’s men into the military reserves. He said the campaign’s target was individuals who had already completed their mandatory conscription.

“They want people who have some experience,” he said. “They were taking people who served before and put out lists of the reserves call-up, instead of sending them to people’s homes so they don’t go into hiding.”

He said checkpoints around the city were given the list and they were checking the IDs of young men passing through, before conscripting them on the spot if they were on the call-up rota.

“If they are wanted for the reserves they immediately take them without question,” he said. “No ‘go home first and get your clothes’, even.” The government has also introduced roving checkpoints that spring up in neighbourhoods to check for potential recruits.

Another man from Damascus said four of his friends, who had not completed reserves training, were taken from their homes to an army base in the city early last week. “There are trucks driving around with loudspeakers ordering men and boys to join,” he said.

Cast as a mission to liberate Syria from terror, the Russian campaign launched on 30 September continues to focus much of its energies far from Isis strongholds. Regional military officials and diplomats say at least 80% of Russian airstrikes continue to target areas held by all elements of the non-Isis opposition, including jihadist, Islamist and non-ideological groups.

The Syrian Network for Human Rights, which chronicles attacks across the country, said mosques, bakeries, residential buildings, schools, power stations and water supplies have been repeatedly hit. It has compiled records of 570 civilians, including 152 children, killed in Russian attacks.

In Idlib, which fell to opposition groups led by jihadists including Jabhat al-Nusra last spring, civil defence workers say at least six airstrikes hit a residential neighbourhood in the heart of the city, killing at least 70 people and wounding more than 100. The attacks followed documented strikes on at least 13 hospitals and medical clinics since early October, and attacks just south of the two main border posts between Turkey and north-western Syria in December.

“They have crippled aid deliveries and even routine supplies to Aleppo,” said one senior NGO worker. “Next to nothing is getting through. Those who remain in the north are being starved out. This is a clear military strategy.”

Last week, at least 70 explosions, many of them also caused by airstrikes, hit war-ravaged Ghouta near the Syrian capital, killing dozens more and signalling another escalation in a Russian campaign that Vladimir Putin insists is targeting Isis.

“We’ve never been bombed like this,” said Issa Khaled, one of up to 300,000 residents who remain in eastern Ghouta, the scene of one of several catastrophicchemical attacks in August 2013. “The skies above us looked like Hiroshima. There were clouds like mushrooms everywhere we looked. The destruction was incredible.”

Harith Abdul Baqi, 34, a military leader in Syria’s far north, said: “This is clearly aimed at destroying the revolution. They are using the Kurds [whose forces in the area are known as the PYD] as a ground force now, because the Syrian army has not been able to perform. This has surprised the Russians. They have found themselves in a swamp.

“Their goal is to allow the PYD to control the supply lines and the border. They also want to put pressure on Turkey, who do not want to lose influence so close to their frontier.

“South of Aleppo, they were making a lot of progress early in their campaign. The Shia militias were leading it with all of their force. But now they have stopped. They are going nowhere, despite far superior numbers and equipment.”

Opposition groups and regional diplomats say Shia militias near Aleppo have been dominated by Afghan Shias brought to Syria by Iran and led by Iranian officers and senior members of Hezbollah.

“The problem is that this is not their cause and they don’t have the will to fight. There have been 17 senior Iranian officers killed trying to instil order and discipline, including several generals. And only one was killed by Isis,” Baqi said.

“This isn’t going well for them. I can’t see the north settling down anytime soon.”