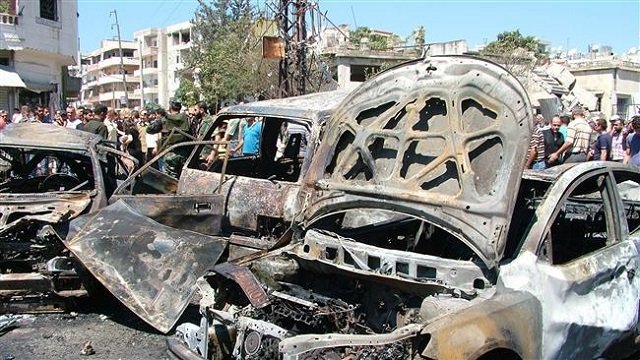 The two explosions late on Friday and ensuing protests killed at least 37 people in and around the town of Sweida, a stronghold of Syria’s Druze minority, activists on the ground told Reuters.

Druze leader Sheikh Wahid al-Balous, who had opposed the Syrian government and insurgents fighting it, was killed by one of the bombs on the outskirts of Sweida. The other blast took place in Sweida about the same time.

Syrian state media confirmed the two explosions and a death toll of more than two dozen people, but did not mention Balous.

There was no claim of responsibility for either blast.

After the attacks, dozens of people protested outside government buildings in the Sweida area, setting cars alight and destroying a statue in the town of Hafez al-Assad, father of Bashar al-Assad.

This does not bode well for the Assad regime if the Druze who have mostly been neutral in this civil war begin attacking regime forces in the south. The Druze are known to be ferocious fighters.

The Assad security personnel died during the unrest by Druze gunmen.

Sweida province has seen assaults from Islamic State fighters in the east and other insurgent groups, including the al Qaeda-linked Nusra Front, from the west, in separate attempts to advance on the area.

The area borders the Damascus countryside and Deraa province, both strategically important to Assad.

In fighting early in the summer, insurgents in Sweida province tried to capture a main road to Damascus. But such intense violence in Sweida, the province’s capital, is rare.

Calm had returned to the area on Saturday morning.