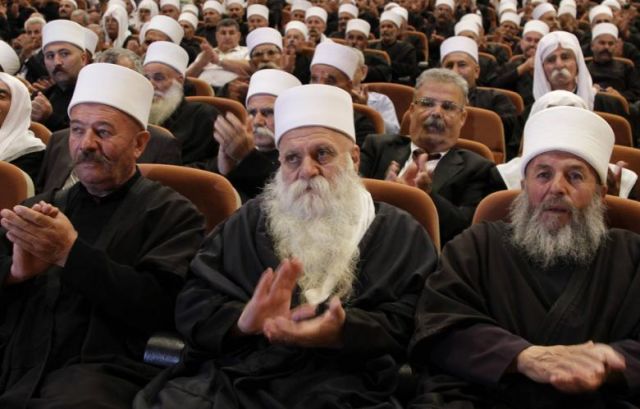 Hang the Muslim Extremists Who Killed the Druze

June 12, 2015 10:42 am 0
In New Sign of Assad’s Troubles, Syria’s Druze Turn Away From Him
Assad Alawite Militias Beat Druze Students
How Israel Views the Druze as Opposed to the Alawites

At least twenty Druze have been killed by al-Qaeda-affiliate Al-Nusra Front (JAN) in Syria’s Idlib province, despite reassurances from JAN’s leader last week that religious minorities would not be targeted and persecuted by the extremist group.

Local activists alleged the killings happened in the village of Qalb Lawzah in Idlib province, which is now controlled by the Army of Conquest (Jaish al-Fateh) coalition who took control of nearly the whole province in April.

It started when villagers had protested after a Tunisian JAN leader “tried to seize a house belonging to a Druze resident of Qalb Lawzah, claiming he was loyal to the regime”.

“Relatives of the owner of the house protested and tried to stop him, then there was an altercation and shooting.”

“The Tunisian leader brought his men and accused the Druze residents of the village of blasphemy and opened fire on them killing at least 20 people, among them elderly people and at least one child.” We say, hang the Muslim extremists hho opened fire on the innocent Druze civilians.

In an interview with Al Jazeera Arabic last week, JAN leader Abu Mohammed al-Jolani said that his group would not target religious minorities in Syria saying that JAN “only fights those who fight us”. If so, then al-Jolani should capture the Muslim extremists and their leader and behead them publicly in the same spot they killed 20 innocent Druze civilians.

Hang the Muslim extremists who killed the innocent Druze.

As a result of that mistake, the Druze took-up arms and fought side-by-side with the Assad forces, which recaptured the al-Thalaa military base in Sweida.

Hang the Muslim extremists leader, or pay the consequences by losing the war against the Assad regime.

Hang the Muslim Extremists Who Killed the Druze