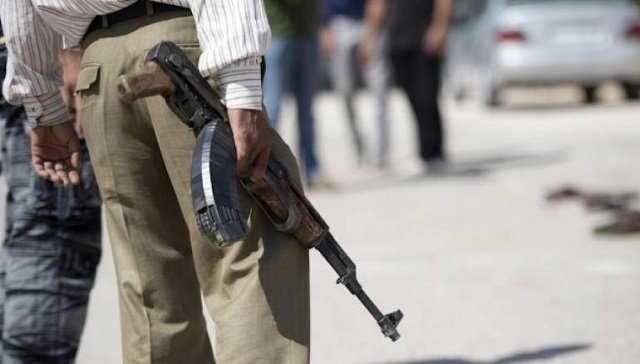 September 5, 2015 6:56 am 0
Shell Landed on Russian Embassy in Damascus
Obama Will Not Lift a Finger if Assad Gasses Syrians
Another Obama lie

According to all4syria.info, over the first 3 days of September, there has been a noticeable and widespread increase in the number of Russian and Iranian Militias elements in the center of Damascus and around the vicinity of the Baramka, Bahsa, and the Kafarsouseh districts. Kfarsouseh was the district where Imad Mughnieyh was assassinated in 2008.

Venice Hotel has become a headquarter for the Iranian Militias representing the Iranian occupation of Syria.

Furthermore, Hezbollah has been renting villas in the vicinity of Yafour and al-Saboura districts and turn them into military operations centers for the Shabeeha militias. Reports have surfaced that owners of these villas have been compensated generously to lease these spacious villas.

The Iranian Militias, most susceptible to wearing sectarian jewelry hailing Hussein and Zainab, have been seen in larger numbers around the Omayyad Mosque, the symbol of Sunni Islam in Damascus. Their increasing numbers signal that Iran is now beginning to fully control Damascus.

The Iranian Militias has been observed protecting the newly opened Hezbollah recruiting center in the Shagour district in Damascus. The capital of Syria, now unrecognizable, has become an extension of the Tehran terror machine.

Residents in these districts have been complaining over the last three days of ill-treatment at checkpoints by the Russian and Iranian Militias and excessive harassment against the residents living in those districts. Just as the Nazis descended upon Paris and began their campaign of terror, so are the Iranian Militias in Syria.

Syrians will never tolerate such occupation, which, thanks to Assad, may last years before the Syrian people are able to dislodge the Iranians from their homeland.

It will not be long before these Iranian Militias invite suicide car bombs and suicide vests into Damascus. Targeting and killing Iranians working for the regime lifts the morale of the rebels fighting to depose Assad. They will not miss this opportunity now that they are out in the open flexing their muscles of terror.

While Syrians fight Syrians (Syrian Army vs. rebels), the Iranian Militias plays god in Damascus, a point not missed by the Syrian people.

Assad’s U.N. Partners
Washington, we have a problem in Syria
Daft as a Brush
Iranian Terror 594