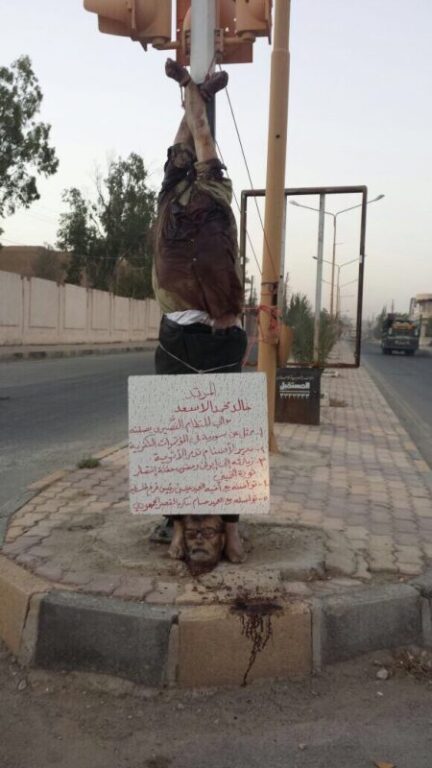 August 19, 2015 8:15 am 0
Obama’s Plans Against ISIS Go Up in Smoke
Hostage Kayla Mueller Was Raped by ISIS Leader Abu Bakr al-Baghdadi
Bashar Assad may be weaker than he thinks

TFS Note: When ISIS beheads a scholarly Syrian, it is on orders from Assad and Khamenei regimes. ISIS is a product of both. Its job is to keep us focused on its terror while the Assad and the Iranian terrors go unnoticed. With Obama’s help, the world is falling for this ruse.

Islamic State of Iraq and Syria (ISIS) militants beheaded an antiquities scholar in the ancient Syrian city of Palmyra and hung his body on a column in a main square of the historic site, Syria’s antiquities chief said on Tuesday.

ISIS is a product of the Assad regime. When ISIS beheads a Syrian scholar, it is on orders from Assad to divert our attention away from his terror, and keep us busy fighting ISIS. In doing so, we ignore the Iranian grand terror machine in the region.

ISIS, whose insurgents control swathes of Syria and Iraq, captured Palmyra in central Syria from government forces in May, but are not known to have damaged its monumental Roman-era ruins despite their reputation for destroying artifacts they view as idolatrous under their puritanical interpretation of Islam.

Syrian state antiquities chief Maamoun Abdulkarim said the family of Khaled Asaad had informed him that the 82-year-old scholar who worked for over 50 years as head of antiquities in Palmyra was executed by ISIS on Tuesday.

Asaad had been detained and interrogated for over a month by the ultra-radical Sunni Muslim militants, he told Reuters.

“Just imagine that such a scholar who gave such memorable services to the place and to history would be beheaded … and his corpse still hanging from one of the ancient columns in the center of a square in Palmyra,” Abdulkarim said.

“The continued presence of these criminals in this city is a curse and bad omen on (Palmyra) and every column and every archaeological piece in it.”

Abdulkarim said Asaad was known for several scholarly works published in international archaeological journals on Palmyra, which in antiquity flourished as an important trading hub along the Silk Road.

He also worked over the past few decades with U.S., French, German and Swiss archeological missions on excavations and research in Palmyra’s famed 2,000-year-old ruins, a UNESCO World Heritage Site including Roman tombs and the Temple of Bel.

Before the city’s capture by ISIS, Syrian officials said they moved hundreds of ancient statues to safe locations out of concern they would be destroyed by the militants.

In June, ISIS did blow up two ancient shrines in Palmyra that were not part of its Roman-era structures but which the militants regarded as pagan and sacrilegious.

Reuters contributed to this story