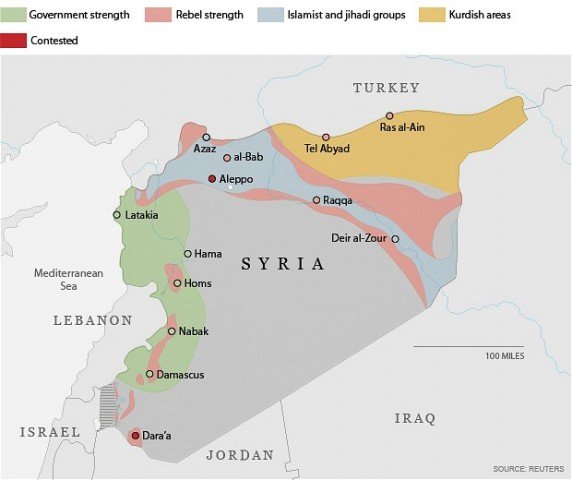 Of Vacuums and Mass

Within the ranks of the liberal Syrian opposition, much time is spent to answer our concerns about the alternative to Assad. Given the Obama Administration failed to construct a coherent policy based on empowering the Free Syrian Army early on when almost all of its high officers are liberal-minded, it is normal to ask the ultimate question of who will succeed Assad. Incidentally, many of the FSA members, to this day, embrace a liberal agenda. Some of them are married to minorities the same way Baschar and Maher al-Assad are married to Sunnis.

Before I touch upon that subject, let me address another more radical solution many in the minority circles would like to see it deployed.

It centers on splitting Syria into three different statelets. One statelet will harbor the Alawite and the Christian minorities by the Mediterranean and down the Lebanese borders, another by the Kurds in the north, and a third by the Sunni majority of Syria to be contiguous to a similar conceptualization in Iraq where the Sunnis already control its western region, which is pretty much in place today.

The idea is to confine all the Sunnis on all four sides with its southern flank delineated by the Saudi borders. Such arrangement, if it comes to fruition, will also have negative repercussions because it assumes all Sunnis are extremists. The fanatics will overrun the tribes and the moderates. If the idea is to eradicate extremism, I fail to see how this concept helps achieve that goal.

Besides, Sunnis will be in control of mostly arid lands with no access to real sources of revenues. This means no neighbor will ever have the peace of mind they look for considering there are almost 30 million Sunnis between Iraqi and Syria. When you look at the map above, you can see pretty much a skeleton mapping of the three statelets.

Let us therefore consider an alternative planning the US can implement today.

First, let me make a statement to the effect that the Free Syrian Army, which is not affiliated with Jabhat al-Nusra or ISIS, remains loyal to liberalism. The FSA has suffered many defections because of lack of US support but its members remain committed to a liberal agenda (I speak to them on an intermittent basis). Assad fears the FSA the most because it could become his alternative. In fact, he has concentrated his firepower on defeating the FSA while letting ISIS or Jabhat al-Nusra roam free because he knows the West would never accept either to rule Syria.

Of all the major four fighting groups in Syria today, the only group that does not receive any support from outside or has access to weapons is the FSA. Someone at the NSC does not know what he or she is doing, or they are on-board to divide Syria, which I believe will come to regret one day, or they believe negotiations with Iran is the centerpiece of a foreign policy initiative taking precedence over other interests and over relations with US allies.

If Mr. Obama orders to strike ISIS without striking Assad, Sunnis will pour into ISIS lap. Many of them will be sympathizers, not fighters, with some holding sensitive jobs in the oil and military industries of many Arab countries. There is no need to explain what this means for US interests and the stability of the region.

If Mr. Obama strikes ISIS and Assad without supporting the FSA, then he should strike neither because the vacuum will be replaced either by Assad or ISIS depending on who is faster to re-arm and re-group. Either one of them will extend the war and the suffering of the Syrian people without accomplishing much benefit to the US.

If Mr. Obama orders to strike ISIS and Assad while simultaneously orders considerable support for the FSA (Not the hollow words we have been hearing now for over two years), then the FSA will occupy the developed vacuum. Control of who joins the FSA (The strong horse theory) will have to be part of the vetting process that the US has already initiated. With this plan, there would still be a chance to save Syria by striking an agreement with an Assad-less minority government to emulate the successful Lebanese system, which has survived since 1946. In addition, it will relieve the region from some of the sectarian tensions that will continue to destabilize the region if Mr. Obama orders to strike ISIS only.

If the Obama Administration decides to strike ISIS only, as it did in Iraq, then I urge the administration to qualify its singlehanded bias towards striking the terror of the Sunnis while letting the Shia terror alone by also airlifting supplies to besieged cities like Aleppo. This will go far in limiting the capacity of ISIS to recruit and at the same time, show a humanitarian side Mr. Obama is distilling in a sectarian fashion in Iraq thus fueling more anger.

Will Mr. Obama do the right thing? I believe he is a hostage to the Iranian negotiations and as such, he thinks the world would forget all his foreign policy disasters if he succeeds; He could care less about whether the Arab world would ever forget the atrocities of Iran, Assad, and Hezbollah and he could care less about what may happen to Israel.

What if Mr. Obama does not succeed in his negotiations with Iran? He will probably spin it as a success no matter what the outcome is.

In the meanwhile, we lost an opportunity to eradicate state sponsors of terror on a permanent basis. No one will forget this reality.