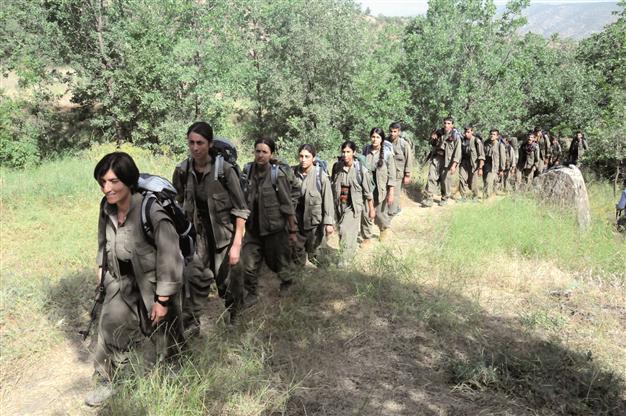 August 2, 2015 10:22 am 0
An Internal Alawite Coup in the Making?
Obama Stands Blameless for a New Class of Extremists in Syria
When Peace is Worse Than War

Two Turkish soldiers were killed and at least two dozen other troops were wounded early Sunday in a suicide attack blamed on Kurdish militants, as Ankara kept up its air campaign against the rebels’ bases in northern Iraq.

The attack in the Dogubayazit district of the eastern Agri province is the first time Kurdistan Workers Party (PKK) militants have been accused of staging a suicide attack in the current crisis, amid an escalating cycle of violence that appears to have no end in sight.

Ankara has launched a two-pronged “anti-terror” offensive against Islamic State (IS) jihadists in Syria and PKK militants based in northern Iraq after a wave of attacks inside Turkey.

But so far the bombardments have focused far more on the Kurdish rebels — with Turkish official media claiming that 260 suspected PKK members have been killed so far — and the militants have retaliated inside Turkey.

There is also growing controversy over possible civilian casualties in the Turkish bombings, and the local Kurdish authorities in northern Iraq on Saturday urged the PKK to spare civilians.

With this latest counter attack by the PKK, one wonders if Syria’s civil war spilling into Turkey?

The suspected PKK suicide bomber drove a tractor laden with explosives up to the military station in the Dogubayazit district, the official Anatolia news agency reported, quoting the local governor’s office.

Two soldiers were killed and 24 were wounded. The soldiers were deployed with the local Jandarma (Gendarmerie), a branch of the army that looks after internal security in Turkey.

Is Syria’s civil war spilling into Turkey because of a large Kurdish population eager to land-unite with Kurdistan Iraq?

In a separate incident also blamed on the PKK, one Turkish soldier was killed and four were wounded early Sunday when a mine exploded as their convoy was travelling on a road in the Midyat district of the Mardin province in southeastern Turkey, Anatolia said.

The PKK’s insurgency for greater rights and powers for Turkey’s Kurdish minority has claimed tens of thousands of lives since it began more than 30 years ago. The current fighting has left a 2013 ceasefire in tatters.

According to an AFP toll, at least 17 members of the security forces have now been killed in attacks blamed on the PKK since the fresh crisis erupted last week.

The attacks are the most severe in Turkey since the 2013 ceasefire, which raised hopes of finding a peace deal and sealing a historic reconciliation between the modern Turkish state with Kurds, by far its largest minority.

If Syria’s civil war spilling into Turkey continues, it will have dire consequences for the whole region.

Turkey’s Kurdish militants have sought cover in neighboring northern Iraq where the presence of the PKK has long been tolerated in Iraq’s Kurdish-ruled region. More fighters also crossed into the area from Turkey as part of the 2013 ceasefire.

The office of the region’s president Massud Barzani said in a statement Saturday that the PKK rebels must “keep the battlefield away from the Kurdistan region” to prevent civilian casualties.

The impact of the bombing campaign — which has seen daily raids by dozens of Turkish F-16s on the PKK’s holdouts in remote mountain territory in northern Iraq — remains unclear.

Anatolia published a report late Saturday claiming that the group’s leadership has split into three to protect itself from further air strikes.

One group will stay at its headquarters on Qandil Mountain in northern Iraq, one has gone to a Kurdish-controlled region in Syria and another, including top PKK leader Murat Karayilan, has fled to Iran, it said.