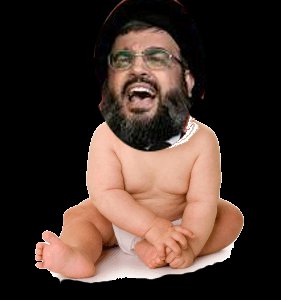 Did you know Hezbollah was pregnant?

August 16, 2014 7:10 pm 0
Obama’s apologies to Iran and criticism of Arabs
Kofi’s Cloak of Terror
Did Assad Threaten to Gas Other Countries?

Indeed, Hezbollah gave birth to a baby boy (It cannot give birth to girls) it has named the Arab Tawhid Party (ATP) whose leader is none other than Wiam Wahhab, the mouthpiece of Assad in Lebanon.

As Hezbollah is mired in Syria killing women and children, so is the Arab Tawhid Party. To show its heroism and that it is meeting its martyrdom quota, the Party announced to the Lebanese media the names of those who died while killing others in another country. The announcement came in the form of a small news item published in the Nahar newspaper in Lebanon. It said:

The Arab Tawhid Party, led by former minister Wiam Wahhab, mourned on Saturday a Syrian member who died ?while resisting to an armed attack? in the neighbouring country’s town of Dama.

“With pride, we mourn our dear martyr Naji Abou Shaqra who hails from Dama in Syria,? the party announced in a statement.

We salute the soul of Abou Shaqra and all his fellow martyrs who died defending our people in Dama and the nation, the statement said.

The party also mourned other ?martyrs who are Adham Faraj, Adham al-Jaramani and Nawraj al-Safadi who died defending their village,? without indicating which town they hailed from.

In November 2013, the Arab Tawhid Party announced for the first time the death of members involved in the Syrian war, noting that they died in Aran village of Mount Hermon.

Many Lebanese have taken part in the ongoing civil war in neighboring Syria, particularly Hizbullah members and party chief Sayyed Hassan Nasrallah has repeatedly assured that he will not withdraw fighters before exterminating the takfiri threat.

With regard to Nasrallah?s last statement and for those who follow the Syrian civil war, it is noteworthy to mention that in the South of Syria where Daraa is located, there are no extremists, no takfiris, and no Islamists fighting Assad. Many of those who live in Daraa belong to the Druze faith. The takfiris Nasrallah is talking about are up north. Besides this clarification, Nasrallah first entered the Syrian civil war before Assad released these takfiris from jail.

Hezbollah has been killing Syrian women and children the same way Assad has not attacked ISIS most of the time but concentrated his firepower and his terror against the civilians of Syria.