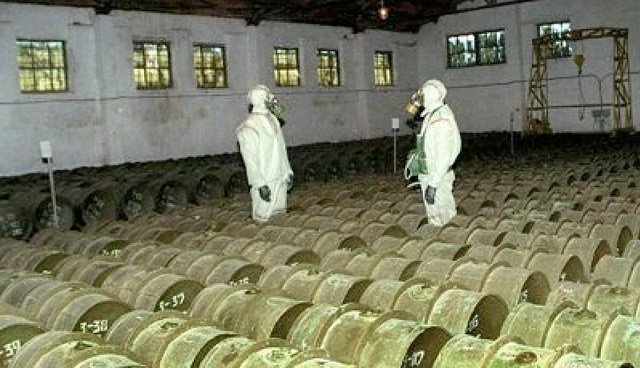 Assad Regime Has Moved Weapons to as Many as 50 Sites

A secretive Syrian military unit at the center of the Assad regime’s chemical weapons program has been moving stocks of poison gases and munitions to as many as 50 sites to make them harder for the U.S. to track, according to American and Middle Eastern officials.

The movements of chemical weapons by Syria’s elite Unit 450 could complicate any U.S. bombing campaign in Syria over its alleged chemical attacks, officials said. It also raises questions about implementation of a Russian proposal that calls for the regime to surrender control of its stockpile, they said.

U.S. and Israeli intelligence agencies still believe they know where most of the Syrian regime’s chemical weapons are located, but with less confidence than six months ago, U.S. officials said.

Secretary of State John Kerry met Thursday in Geneva with his Russian counterpart to discuss aÂ road map for ending the weapons program. The challenges are immense, Mr. Kerry said.

The U.S. alleges a chemical-weapons attack by the Syrian government on Aug. 21 killed more than 1,400 people, including at least 400 children. Syrian President Bashar al-Assad on Thursday again denied any involvement in a chemical attack, but he said his government was prepared to sign an agreement banning the use of chemical weapons. Syrian officials couldn’t immediately be reached for comment on the weapons.

Unit 450 – a branch of the Syrian Scientific Studies and Research Center that manages the regime’s overall chemicals weapons program – has been moving the stocks around for months, officials and lawmakers briefed on the intelligence said.

Movements occurred as recently as last week, the officials said, after Mr. Obama said he was preparing to launch strikes.

A man affected by what activists say was nerve gas received assistance in the Damascus suburbs last month.

The unit is in charge of mixing and deploying chemical munitions, and it provides security at chemical sites, according to U.S. and European intelligence agencies. It is composed of officers from Mr. Assad’s Alawite sect. One diplomat briefed on the unit said it was Alawite from “janitor to commander.”

U.S. military officials have looked into the possibility of gaining influence over members of Unit 450 through inducements or threats. “In a perfect world, you would actually like to co-opt that unit. Who cares who pays them as long as they sit on the chemical weapons,” said a senior U.S. military official.

Although the option remains on the table, government experts say the unit is so close-knit that they doubt any member could break ranks without being exposed and killed.

The U.S. estimates the regime has 1,000 metric tons of chemical and biological agents. “That is what we know about. There might be more,” said one senior U.S. official.

The regime traditionally kept most of its chemical and biological weapons at a few large sites in western Syria, U.S. officials said. But beginning about a year ago, the Syrians started dispersing the arsenal to nearly two dozen major sites.

Unit 450 also started using dozens of smaller sites. The U.S. now believes Mr. Assad’s chemical arsenal has been scattered to as many as 50 locations in the west, north and south, as well as new sites in the east, officials said.

The U.S. is using satellites to track vehicles employed by Unit 450 to disperse the chemical-weapons stocks. But the imagery doesn’t always show what is being put on the trucks. “We know a lot less than we did six months ago about where the chemical weapons are,” one official said.

The movements, activities and base locations of Unit 450 are so sensitive that the U.S. won’t share information with even trusted allies in the opposition for fear the unit would be overrun by rebels, said current and former U.S. officials.

The U.S. wants any military strikes in Syria to send a message to the heads of Unit 450 that there is a steep price for following orders to use chemical weapons, U.S. officials said.

At the same time, the U.S. doesn’t want any strike to destabilize the unit so much that it loses control of its chemical weapons, giving rebels a chance to seize the arsenal.

“Attacking Unit 450, assuming we have any idea where they actually are, would be a pretty tricky affair because”¦if you attack them you may reduce the security of their weapons, which is something we certainly don’t want,” said Jeffrey White, a veteran of the Defense Intelligence Agency and a defense fellow at The Washington Institute.

Within Syria, little is known about Unit 450 or the Syrian Scientific Studies and Research Center. One of the buildings is in a sprawling complex on the outskirts of Damascus.

Even high-ranking defectors from the Syrian military that form the core of the rebel insurgency – including those who served in units trained to handle chemical attacks – said they hadn’t heard of Unit 450.

The Pentagon has prepared multiple target lists for possible strikes, some of which include commanders of Unit 450.

But a senior U.S. official said no decision has been made to target them, reflecting the challenge of sending a message to Unit 450 without destabilizing it.

In some respects, officials said, the hands-on role that Unit 450 plays in safeguarding the regime’s chemical weapons secrets makes it too valuable for the U.S. to eliminate, even though the U.S. believes the unit is directly responsible for the alleged chemical weapons abuses.

The Syrian Scientific Studies and Research Center answers only to Mr. Assad and the most senior members of his clan, according to U.S. and European officials. Attack orders are forwarded to a commanding officer within Unit 450.

If the Russians clinch a deal for Mr. Assad to give up his chemical weapons, any prospective United Nations-led force to protect inspectors and secure storage sites would likely need to work closely with Unit 450 and the research center, current and former administration officials said.

Gen. Martin Dempsey, the chairman of the U.S. military’s Joint Chiefs of Staff, has said that President Barack Obama directed him to plan for “a militarily significant strike” that would deter the Assad regime’s further use of chemical weapons and degrade the regime’s military capability to employ chemical weapons in the future.

But officials said the U.S. doesn’t plan to bomb chemical weapons sites directly because of concerns any attack would disperse poison agents and put civilians at risk.

In addition to satellites, the U.S. also relies on Israeli spies for on-the-ground intelligence about the unit, according to U.S. and Israeli officials.

Though small in size, Unit 450 controls a vast infrastructure that makes it easier for the U.S. and Israel to track its movements. Chemical weapons storage depots are guarded by the unit within larger compounds to provide multiple layers of security, U.S. officials said.

Whenever chemical munitions are deployed in the field, Unit 450 has to pre-deploy heavy equipment to chemical mixing areas, which the U.S. and Israel can track.