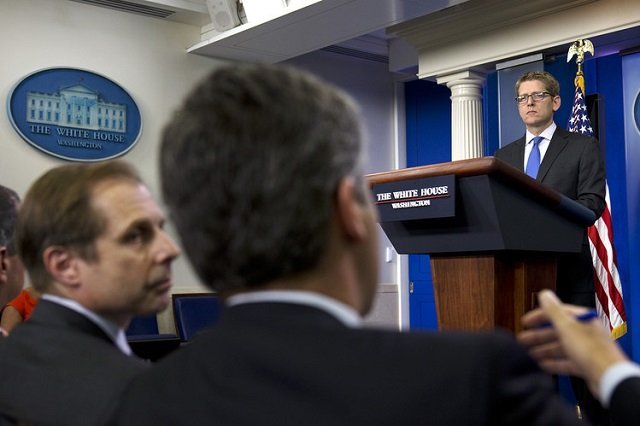 U.S. leaks tell Assad he can relax. The bombing will be brief and limited.

An American military attack on Syria could begin as early as Thursday and will involve three days of missile strikes, according to “senior U.S. officials” talking to NBC News. The Washington Post has the bombing at “no more than two days,” though long-range bombers could “possibly” join the missiles. “Factors weighing into the timing of any action include a desire to get it done before the president leaves for Russia next week,” reports CNN, citing a “senior administration official.”

The New York Times, quoting a Pentagon official, adds that “the initial target list has fewer than 50 sites, including air bases where Syria’s Russian-made attack helicopters are deployed.” The Times adds that “like several other military officials contacted for this report, the official agreed to discuss planning options only on condition of anonymity.”

Thus do the legal and moral requirements of secret military operations lose out in this Administration to the imperatives of in-the-know spin and political gestures.

It’s always possible that all of this leaking about when, how and for how long the U.S. will attack Syria is an elaborate head-fake, like Patton’s ghost army on the eve of D-Day, poised for the assault on Calais. But based on this Administration’s past behavior, such as the leaked bin Laden raid details, chances are most of this really is the war plan.

Which makes us wonder why the Administration even bothers to pursue the likes of Edward Snowden when it is giving away its plan of attack to anyone in Damascus with an Internet connection. The answer, it seems, is that the attack in Syria isn’t really about damaging the Bashar Assad regime’s capacity to murder its own people, much less about ending the Assad regime for good.

“I want to make clear that the options that we are considering are not about regime change,” White House spokesman Jay Carney said Tuesday. Translation: We’re not coming for you, Bashar, so don’t worry. And by the way, you might want to fly those attack choppers off base, at least until next week.

So what is the purpose of a U.S. attack? Mr. Carney elaborated that it’s “about responding to [a] clear violation of an international standard that prohibits the use of chemical weapons.” He added that the U.S. had a national security interest that Assad’s use of chemical weapons “not go unanswered.” This is another way of saying that the attacks are primarily about making a political statement, and vindicating President Obama’s ill-considered promise of “consequences,” rather than materially degrading Assad’s ability to continue to wage war against his own people.

It should go without saying that the principal purpose of a military strike is to have a military effect. Political statements can always be delivered politically, and U.S. airmen should not be put in harm’s way to deliver what amounts to an extremely loud diplomatic demarche. That’s especially so with a “do something” strike that is, in fact, deliberately calibrated to do very little.

We wrote Tuesday that there is likely to be no good outcome in Syria until Assad and his regime are gone. Military strikes that advance that goal—either by targeting Assad directly or crippling his army’s ability to fight—deserve the support of the American people and our international partners. That’s not what this Administration seems to have in mind.