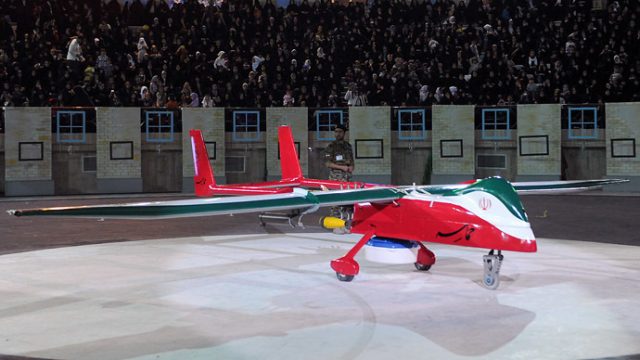 In the aftermath of an Iranian drone Israel infiltration that took place after Israel attacked Iranian weapon factories in Syria a day earlier, Falafel decided it was time to interview the ex-president of the United States Barack Obama. Somehow, Falafel had a hunch Barack would shed new light upon these new Iranian aggressive activities.

Armed with a pen and a pad, Falafel drove to Kalorama Avenue in anticipation of a good interview.

As a beaming ex-president entered the room, Falafel could not help but notice the broad smile BO was flaunting as he shook Falafel’s hand.

Falafel: Mr. President, you look like you just ate a canary.

BO: This is a happy day indeed my friend.

Falafel: Maybe you can explain to our readers why this is a happy day.

BO: The Iranians are doing their part. Finally. All those meetings Valerie (Jarrett) had with Khamenei are bearing fruit.

Falafel: What do you mean Mr. President?

BO: Oh, come on Falafel. Don’t tell me you have not caught on with what is happening here. Why do you think I stood behind the JCPOA with all the powers a White House can afford me?

Falafel: Please, my readers are all ears.

BO: It is to get to this point where an Iranian drone Israel infiltration takes place. It is to get to a point when Iran finally attacks Israel and annihilates this country out of existence.

Falafel: Mr. President, you let everyone believe it was to save Israel. That the JCPOA was to stop Iran from nuclearization.

BO: Silly you Falafel. When was the last time, post WWII, a country attacked another using a nuke? Zero times. Now ask yourself, when was the last time a country attacked another using conventional weapons with the same slow destructive results? Many, many times since WWII. The most potent threat to Israel is a conventional war, not a nuclear one; something I facilitated with flying colors.

Falafel: So the JCPOA was never about limiting Iranian destructive powers?

BO: Just the opposite my friend, it was about unleashing Iran in the region to ride the backs of the Arabs all the way to Jerusalem. The Mullahs did their part, as they promised Valerie, by controlling the capitals of four Arab countries during my tenure; the most important of which was Damascus. Why do you think I did nothing in Syria? Syria was to become the launching pad from where the Iranian Mullahs would attack Israel.

Falafel: You allowed some 600,000 Syrians to die and 6 million Syrians to seek refuge in neighboring countries just for you to unleash Iran to destroy Israel?

BO: I did not start the civil war in Syria. I just took advantage of it.

Falafel: So, all those policies to support the rise of the Muslim Brotherhood in Egypt, the $billions in cash infusion under the JCPOA, the red line you smoked so quickly, ignoring Iranian capture and abuse of our sailors, and playing golf when the Iranians were setting the region aflame were all part of helping the Mullahs destroy Israel?

Falafel: What do you have against the Jews Mr. President?

BO: Oh, nothing. My professors at Harvard hated them and every author I read growing up hated them. So, I hate them too with one exception: I became the U.S. President and I could do something about my hate.

Falafel left Kalorama Avenue feeling sick. Barack Obama is a damaged con man who led everyone to believe he was doing the right thing for our country and our allies.

Only the defeat of the Mullahs would defeat Barack Obama.