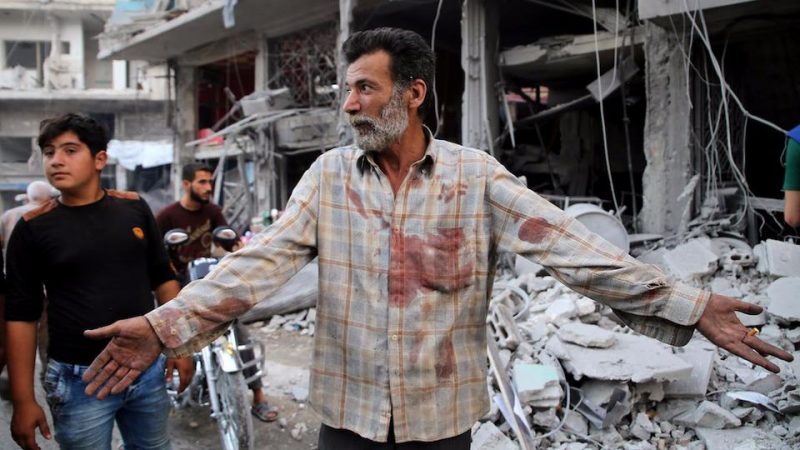 February 11, 2018 9:14 am 0
Iraqi Unrest Prompts the US to React
Iran Built Ten Military Bases in Syria
What will Iran do to protect Hezbollah?

In the span of few days, two downed jets, one Russian and one Israeli, have been witnessed in the battlefield of Syria. What few noticed is the response by each country against what targets.

On one hand, we have Russia’s Putin in Syria testing its military equipment against hospitals, schools, markets, and the White Helmets rescue operations whose work is unapologetically apolitical aimed at saving lives.

After the downing of its jet, Russia pounded the Idlib Province and the Assad regime bombed East Ghouta both causing the loss of 230 civilian lives and countless number of injuries.

Putin and his psychotic protege avenged the killing of the Russian pilot by bombing civilians and their hospitals whether the rebels made the targeted area their homes or not.

Here is how Voice of America described Russian attacks on Idlib Province:

Russian warplanes stepped up airstrikes on Idlib over the weekend .. Sixteen civilians were killed, and schools, hospitals and markets were destroyed, according to activists and civilians in the province.

Israel, on the other hand, attacked massively the Damascus defensive corridor by targeting the Assad Fourth Division, whose leader is none other than the psychopath Maher al-Assad. The Fourth Division’s one and only function is to protect the Assad family.

Here is how the Washington Post described Israeli attacks:

Israel carried out extensive airstrikes inside Syria on Saturday, targeting what the Israeli military said were air defense batteries and army bases as well as Iranian positions… The strikes that followed were Israel’s most significant bombardment inside Syria since the beginning of the nearly seven-year war — hitting 12 military sites in the country — eight Syrian and four that Israel said were Iranian.

Israel targets only military positions of its enemies out to destroy the country.

This is the big difference between a civilized nation and a nation led by savages who defend the use of gas against civilians.

Is there a clearer picture one can take away from two downed jets raising the flag of two different nations?

After WWII, President Truman, along with Churchill, were instrumental in granting the Soviet Union veto powers at the United Nations. This was a mistake since the allies had a very good idea about the savagery of Stalin against his own people.

That savagery lives on in Putin’s blood and his well-chosen puppet Baschar al-Assad.