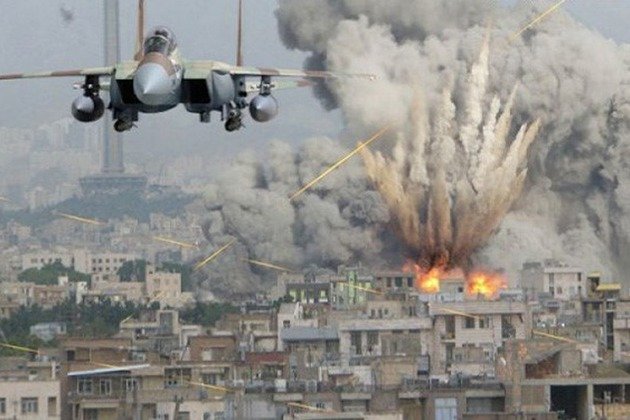 US Long Overdue to Strike Russian Occupation Forces in Syria

February 9, 2018 8:05 pm 0
The Caesar Act is the US Answer for a Diplomatic Regime Change
Turkey Retaliated Against Assad Forces Killing Dozens
Assad Seeks to Start a New War with Israel

The US is long overdue to strike Russian occupation forces in Syria. While Barack Obama, the wimp, opened the door wide open for Vladimir Putin to enter and occupy the Ukraine and Syria, it is time to close that door by putting Putin and his troops on notice. In Syria, yesterday’s good spanking of troops backed by Russia was a good start.

The results of Barack Obama’s wimpiness was Russia, emboldened by his weakness, meddling in our election. You are not going to read this line of logic in any U.S. mainstream media because their cowardly editors are all obscuring and camouflaging the damage BO caused to our national security.

If you read David Ignatius’ latest Op-Ed in the Washington Post, you would know that Russia planned the proxy attack by the Assad forces against the U.S. backed, Kurdish-led Syrian Democratic Forces. The beating the Assad regime took yesterday was described by Ignatius:

U.S. airpower responded to this threat to American troops with devastating firepower, from AC-130 ground-attack planes to armed drones. The Pentagon estimated that more than 100 were killed.

After the carnage, Russia called the Kurdish rebels and begged for a cease of hostility in order to remove the injured from the battlefield. For one hundred fighters to perish in one battle, to include Russian mercenaries, demonstrates the ferocity of the U.S. counter attack to protect its own and its allies.

If the attack by the Assad forces happened on Obama’s watch, Barack would have immediately pulled the U.S. troops out of Syria thus awarding Putin another victory at the expense of U.S. interests. After he calls him to apologize for standing in his way.

What might happen next is anybody’s guess. Is Russia willing to up the ante in order to force the Kurdish aspirations in Syria to become the central theme in Syria’s civil war? Or will Putin stand down by letting Erdogan of Turkey battle through it with the U.S.?

One thing for sure, all those scary new weapons Putin tested on hospitals filled with injured women and children seem to fare much worse against the mighty arsenal of the United States. The Russian-operated S-300 defense shield Putin installed in Syria is, for all intended purpose, a junkyard ornament.

In our opinion, the U.S. is long overdue to strike Russian occupation forces in Syria as part of a tactical move to undo Obama’s damage. Russia is not in a position to open a direct front against the U.S. to protect the Assad regime if an alternative secular leadership, which exists in Syria, is agreed upon to end Syria’s war. For Putin, protecting the Orthodox Church in Syria is his ultimate goal.

Assad is not worth showcasing Putin’s weak country in the face of U.S. power. To strike Russian occupation forces may very well end the Syrian civil war and bring about a positive change in Syria.

US Long Overdue to Strike Russian Occupation Forces in Syria