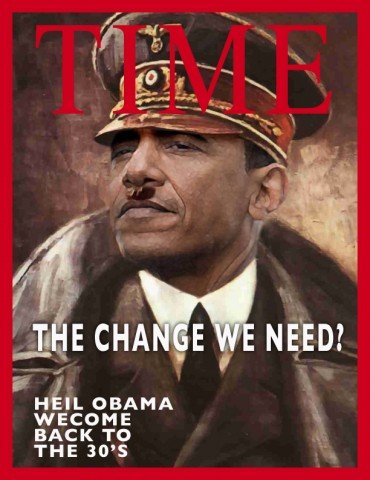 The ISIL danger began when Assad let the Islamists out of his jails, and became a noticeable global danger when Obama kept ignoring Assad massacring civilians. When ISIL formed the Islamic State, it got out of Assad’s control; so, Obama comes to Assad’s rescue faster than you can fuel a fighter jet. As far as Obama is concerned, the civilians Assad is massacring could go to hell.

For the doubters among you, review every single act and decision made by Barack Obama when it comes to Syria and you will reach the same conclusion: Barack Obama has allied himself with the murderous regimes of Assad and Khamenei. After all, who hates Jews more than those two sickies?

I think if Hitler were still around, Obama would join forces with him too.

The Assad regime has become a magnet for anti-Semitism from all the crazies around the world. They demonstrate their support for Assad because even though Obama is secretly fueling the hate, they will not show any support for him.

One of them thinks life under Assad is great. I would like to ship this idiot named Nick Griffin and his family to live in Aleppo for one week. Maybe he will reconsider his statement and change his mind the way the French Jihadists are changing theirs.

The danger of Barack Obama cannot be underestimated. His demeanor, his politics, his friends, his advisors, and his education all point to the chaos we see around the world. For those Syrians who still think Barack Obama is their friend, I truly pity them. Especially those Syrians oppositionists the Obama administration is vetting “vigorously” to combat Assad. This “vetting” window dressing captures the leftover foolish Jews who still believe Barack Obama is their friend when one of his advisers is Stephen Walt.

If you ask me, when Israel comes out of the Obama eight-year cataclysm with as little damage as possible, all Israelis have Benjamin Netanyahu to thank deeply. Obama despises him for a good reason.