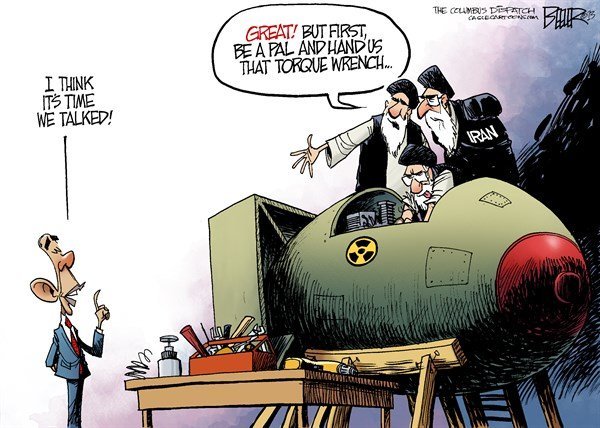 Do not Obamize this deal

December 4, 2014 6:45 am 0
The Dead Horse of Foggy Bottom
Survival of Syrian Minorities
The Assad Crimes Against Syrians, Some Not Older Than 14 Years

CBS published an article entitled “Syria systematically using chemical weapons”. Instead of delving into its analysis, let me just introduce you to the first three paragraphs:

At the Hague Wednesday, the U.S. accused the Syrian regime of continuing to use chemical weapons on civilians as recently as September, despite claims that it has fully destroyed its stockpile as required under a 2013 U.N. treaty. The Obama administration frequently cites that U.S.-Russia brokered deal as a major foreign policy success, in part because the diplomatic agreement helped avert U.S. military strikes triggered by a sarin gas attack that killed hundreds of civilians outside Damascus.

Yet the Syrian regime has not been completely disarmed of that lethal cache, Undersecretary of State Rose Gottemoeller told members of the Organization for the Prohibition of Chemical Weapons (OPCW.)

“Now there is compelling evidence that Syria continues to use chemical weapons systematically and repeatedly,” Gottemoeller said.

The giveaway in those paragraphs is the part in bold. When you read it, Obamacare comes to mind. Obama touted it as a success when it was, and still is, the largest failure the US has undertaken, probably ever. Obama did it again in Syria. He has claimed success over a grandiose failure. This time around, though, his failure is taking lives.

In the future, we should refer to “Do not Obamize this deal” as a reference to avoid the worst deals. In other words, do not f*** it up.

For those hoping Obama to strike a successful agreement with Iran, if any, please do not hold your breath. Khamenei knows what a failure Obama is and most likely is zeroing either on getting a better deal than the Russians did or on ignoring Obama altogether.

In my opinion, Obama does not want a deal with Iran. In watching him operate, I think success for Obama is Iran’s success in producing a nuclear weapon not some ink on some paper. Farfetched maybe, but one has to expect the worse from the worst president ever. Besides, where is the logic in easing sanctions in the middle of negotiations? This is tantamount to a surgeon telling the next of kin how successful a brain operation was while still in the middle of it.

Only Obama can manage this kind of voodoo negotiations.

Iran is developing into a regional power on the back of the misery of the Syrian people, most of whom lived under the torture methods of a known Nazi criminal for over 40 years. Assad is piling up extreme terror today on top of his pile-up of terror yesterday. The more Syrians suffer the stronger Iran gets. Don’t you think Obama knows this?

Incidentally, the man who protected Alois Brunner is now directing the US Air Force over Syria’s skies. Because the US lacked intelligence, it is highly probable the US is relying secretly on Assad’s intelligence (there is a long history of cooperation between the CIA and the Assad regime), which most likely include military positions of the moderate opposition Obama claims he is vetting to combat Assad. Did I mention Obama is also the biggest liar? Only 81% of Americans believe he is a liar.

It is very important to derail the Obama foreign policy train wreck when the new Congress convenes on January 6. All eyes will be on the domestic issues first, but many Representatives are disturbed also by Obama’s abandoning Syria to Iran, and particularly his abandonment of Israel to every form of religious savagery imaginable. No committee testimony and no hearing of expert witnesses, just pass the laws necessary to suck the oxygen out of an Obama-Iran bomb.

I wonder if Congress can seriously limit funding for the US State Department without affecting the security of our embassies overseas. Squeeze Obama any way we can by stripping him of the tools he needs to finalize a bad deal plus to save Syria from Assad and ISIL.

The more we ignore Assad, the stronger Iran gets.

Do not Obamize this deal

The Divisions Between the FSA and the SNC Widen
It is about corruption, fiscal irresponsibility, oppression, and political correctness
Don’t believe you can survive what makes you survive
Slippery Barack Obama 976