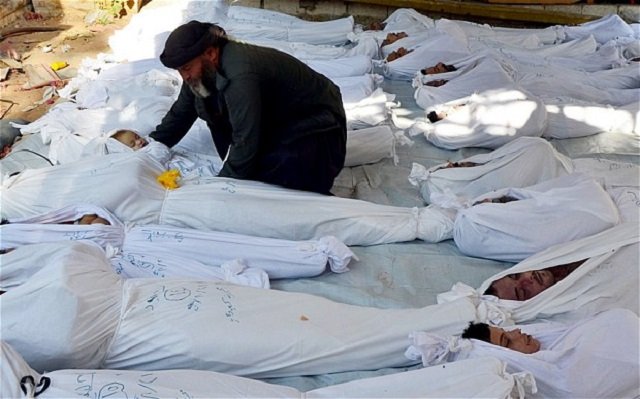 We stood by while others carved up Syria

August 21, 2015 6:02 am 0
Syrian Olympics Athletes are Favors to Killer Generals
[Assad] Man held on accusations of war crimes in Syria
Why the Syrian Opposition is in Turmoil

Source: The Telegraph – by David Blair (We stood by while others carved up Syria)

Acclaim and relief have often greeted the most calamitous decisions in the history of British foreign policy. War in 1914 brought euphoria; appeasement in 1938 led jubilant crowds to gather outside Buckingham Palace.

Two years ago today, rockets laden with sarin nerve gas inflicted agonising deaths on hundreds – perhaps thousands – of people in Damascus. Eight days later, the Commons vetoed David Cameron’s plea to use force against Syria’s bloodsoaked regime, resolving that Britain’s response would be to do nothing. Cue general relief.

Yet with the perspective of the last two years, the decision to leave Syria to its fate looks ever more like a tragic mistake. What has since unfolded is a humanitarian calamity, to be sure, but it also poses a grave threat to our national security.

The simple truth is that while Britain chose to stay out of Syria, other countries were not so restrained. Hansard shows that many MPs who voted against military action in 2013 appeared to think that the choice was between intervention by the West – or leaving Syria to solve itself. “We need a coherent and comprehensive strategy that fully takes into account the consequences of intervention,” said Angus Robertson, the SNP spokesman. “What is currently a calamity for the people of Syria could worsen and become a conflagration across the Middle East.”

Aside from the fact that the “conflagration” was already spreading when he spoke those words – and has spread a lot further since – what Mr Robertson and others like him failed to grasp was that “intervention” was happening anyway.

From the very beginning, Iran was intervening in Syria to guarantee Assad’s survival: Iranian money saved his bankrupt regime from penury, Iranian commanders helped to run his army and Iranian experts provided him with his counter-insurgency strategy. Then, from the summer of 2012, thousands of Hizbollah fighters entered Syria at Iran’s behest to fight alongside Assad’s forces. Meanwhile, Russia was intervening by supplying Assad with advanced weapons; on the other side of the war, Turkey, Saudi Arabia, Jordan and Qatar were all intervening to arm and supply their favoured rebels.

So the choice in Syria was never between Western intervention or leaving the country in a sort of pristine state of civil war, unsoiled by foreign hands. Instead, the only question was who would do the intervening. The lesson for our MPs should be clear: before you decide that Britain has no business in a crisis like Syria’s, you have to be sure that the countries who will be involved are skilful enough to do a better job – and generous enough to protect our interests.

If you do not have such assurances, then staying out involves immense risk. The MPs who voted against force may not have realised, but they were gambling that leaving Syria to Russia, Iran, Qatar et al – plus a dictator who gassed children while they slept – would produce a better outcome.

The results of that gamble are self-evident: every calamity that could have been predicted has come to pass. Assad’s strategy of total war against a largely Sunni population – unrestrained by Western intervention – created ideal laboratory conditions for the jihadist virus to take hold, hence the advance of the Islamic State of Iraq and the Levant (Isil).

Left to themselves, Saudi Arabia, Qatar and Turkey all supported the Islamist elements of the opposition. Meanwhile, the non-Islamist rebels, who had staked everything on Western intervention, were crushed between the millstones represented by Isil plus sundry other extremists and Assad with his poison gas.

Today, more than half of all Syrians are refugees, either within or without their country – and at least 220,000 lie dead. Here is another fact: Syria’s tragedy has claimed more than twice as many lives as all of the Arab-Israeli wars put together, back as far as 1948. And despite the barbarism of Isil, Assad’s regime is still responsible for the vast majority of civilian deaths.

Two years ago, we were told that Western intervention would make things worse. Given the witches’ brew created by a flailing dictator and the amoral powers who were intervening from the start – and are still at it – how could that possibly be true?

We stood by while others carved up Syria