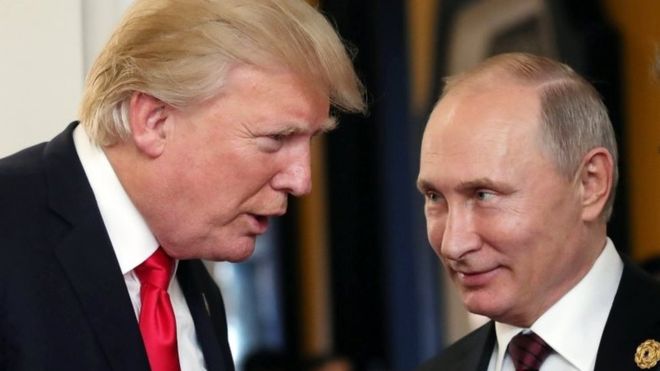 U.S. President Donald Trump, during a brief meeting at a summit in Vietnam on Saturday, made a statement to the effect he believed Russia did not meddle in last year’s U.S. elections because Russian President Vladimir Putin told him so. Hurry, Trump definite buyer of the Brooklyn Bridge.

With his denials, Putin was mocking the American voters and Trump fell into the trap and made him look, with his remarks, like an accomplice.

During their meeting, Mr. Trump and Mr. Putin agreed on a statement with regard to Syria.

It was their first encounter since July and came at a time that U.S.-Russia relations have been battered and Trump is haunted by the accusations that Putin influenced the election that brought him to the White House.

Trump said their agreement to support a political solution to Syria’s conflict would save “tremendous numbers of lives”.

“We did it very quickly,” Trump told reporters aboard Air Force One after leaving the Asia-Pacific Economic Cooperation (APEC) summit in the resort of Danang for Hanoi, Vietnam’s capital. “We seem to have a very good feeling for each other, a good relationship considering we don’t know each other well.”

Talking after their meeting, Putin described Trump as “a well-mannered person and comfortable to deal with”.

“We know each other little, but the U.S. president is highly civil in his behavior, friendly. We have a normal dialogue but unfortunately little time,” he said.

After emphasizing last year on the campaign trail that it would be nice if the United States and Russia could work together on world problems, Trump has had limited contact with Putin since taking office.

The sight of Trump sitting down with Putin in public also revives the issue of election meddling – still under investigation. Trump’s former campaign manager, Paul Manafort, has been indicted in the probe along with his former deputy, Rick Gates.

“There is no confirmation of our mass media meddling in election campaigns – and there can’t be any,” Putin said.