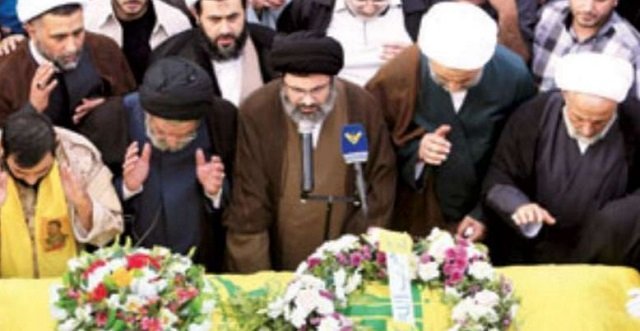 October 16, 2015 7:17 am 0
Time for Israel to Attack Hezbollah?
Falafel Was Invited to Interview Hezbollah’s Chief Before Speech
Why Assad Should Ask for STL Indictments

Saudi Arabia’s al-Watan newspaper published an article citing Hezbollah internal rifts over its role in Syria in the aftermath of the death of one of its leading figures Hassan Hussein al-Hajj who was killed battling the Syrian rebels.

According to private sources close to the Hezbollah leadership, al-Hajj death led to some inflammatory statements that some of Hezbollah top figures made privately. They have long argued against Hezbollah fighting in Syria. These party leaders discounted the feasibility of further operations backing the Assad regime.

While Hezbollah’s Secretary General Hassan Nasrallah is determined to stand by Assad in Syria, other top figures dissenters are demanding that Hezbollah withdraws its troops from Syria noting that Syria’s civil war is not Hezbollah’s war. These dissenters argued that Hezbollah’s image is being tarnished around the world as it backs a genocidal Baschar al-Assad and that the losses Hezbollah has sustained in this war are not worth the results so far.

A source inside Hezbollah – who requested anonymity – told al-Watan that the party leadership held an emergency meeting yesterday to discuss the conduct of operations in Syria. During the meeting, a number of party leaders who spoke publicly for the first time, said they refuse to continue fighting by Assad. They warned the top leadership of Hezbollah of deep internal rifts taking shape among rank and file in the aftermath of al-Hajj death.

The source told al-Watan that Nasrallah was taken back by this unexpected turn of events. He was surprised by their position, and stressed that the top leadership of the party, after consultations, made the decision to participate in the fighting alongside Assad’s. He made it clear it was not an individual decision. However, the dissenters rejected this explanation and insisted on their position that calls for the withdrawal from Syria, which caused a state of pandemonium among those gathered. The dissenters then left the meeting willingly.

The source expects that Hezbollah internal rifts will only increase in the coming days and weeks as the death toll from their operations in Syria rises. Some estimate these numbers to be in the thousands to include prominent field leaders.

Nasrallah finds himself in the middle of a quagmire. If he distances the dissenters from senior leadership positions, he might accelerate the Hezbollah internal rifts to the point of implosion. If he does not, he has to deal with a fifth column that might either split Hezbollah or force a change in the political goals of the Shiite party all together.