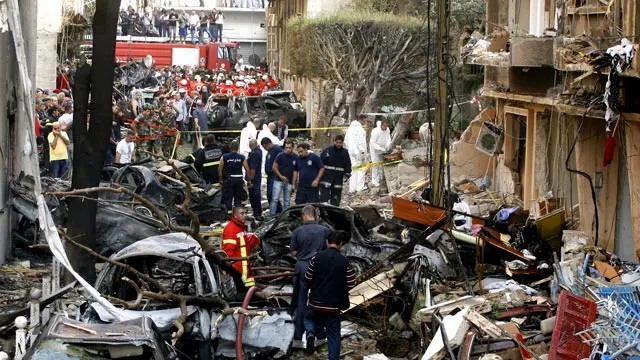 Between Spilling and Containment of the Syrian Civil War

October 20, 2012 8:07 am 0
Free Syrian Army: The Story Behind the Story
Is the Arab League Trading Syria for its Security?
Too Little, Too Late, Too Insulting

The bomb that exploded in Lebanon yesterday devastating Sassine Square in the posh Christian Ashrafieh neighborhood killing a top Sunni intelligence chief along with eight people and wounding some 80 mostly Christian innocent civilians aims to spread sectarian violence to Lebanon and to send a strong signal to Assad and Hezbollah’s foes that their vengeance will be merciless. The terrorists made sure that not only Sunnis and Christians were harmed in the blast but they timed it also to explode when children were leaving their schools for maximum effect and reaction. Syria has reached the moment between spilling and containment the Syrian civil war across borders.

Let’s consider the consequences of this blast within the framework of the Syrian civil war. One that seems to have entered the Iraq-Iran war phase of no winners and no losers.

The Arab League is in no hurry to see the Syrian people win their Revolution. Why? Because it will send a signal to the members’ own oppressed populations that Revolutions could be successful. In fact, the Arab League wants to show their own people how painful any uprising may be to their welfare and future by extending the Syrian civil war. And simultaneous to the Arab League secret stand on this issue, the Arab media spins the whole matter out of control as if to appear to side with the Syrian people. But in reality, the Arab media’s only aim is propagandize the misery awaiting those who dare seek freedom. It wants to show them that America will not come to their aid as it did in Libya.

At the same time, those Arab League member countries funding the Free Syrian Army, represented by Qatar and Saudi Arabia, are trickling their aid to the FSA to picture freeze the Syrian Revolution. The US under the Obama administration is going along with the plan because it slowly weakens Syria but puts an end to the Arab Spring. .

Where this conspiratorial idea come from? From Syrian oppositionists who have been working diligently at the leadership level within the Syrian National Council (SNC). Their close friction with the intelligence services in Qatar has permitted them unprecedented access. Most of them have now quit the Islamist SNC and are starting to chart a new course. They refuse to ride this Syrian Noah’s ship as goats and camels.

BETWEEN SPILLING AND CONTAINMENT OF THE SYRIAN CIVIL WAR

If true, this also means the Syrian Muslim Brotherhood is in cohort with the plan, something that will slowly have an impact among those fighting on the ground.

However, this plan not only is refuted by the FSA but also by Assad and Iran. Assad wants to muzzle the Revolution at all costs and as soon as possible. To achieve this goal, he has embarked on widening the war in order to persuade the Arab League and NATO that the regime will not accept the status quo, which is bleeding its coffers and those of Iran’s faster than anticipated.

This is the reason why Assad is challenging Turkey by lobbing rockets against Turkish villages on the border with Syria. And this is why NATO’s response was a whimper. It also explains why the US sent 150 military experts to Jordan to insure that Assad is unsuccessful in bleeding his war over the borders. All of this explains the reasons behind Assad and Hezbollah planting the bomb in Beirut.

The goal today is between spilling and containment and against one side winning over the other in Syria. The fight is to weaken Assad and Iran while simultaneously and successfully protect the oil countries in the region from their own Revolutions. Of course at the expense of the Syrian people without whom the axis of evil would still be dancing in the streets of Beirut, Damascus, and Tehran.

Iraq temporarily is no longer in the win column but the West is not about to lose any of the GCC countries, Revolutions or no Revolutions. The buck stops at Syria for the GCC and the weakening of Assad and Iran can only be achieved if the buck keeps rolling in Syria.

Of course, all this analysis uses one insider assumption provided by Syrian oppositionists who have been close to Qatar. If the assumption is baseless, then this analysis is worth a penny on Rodeo Drive.

Between Spilling and Containment of the Syrian Civil War