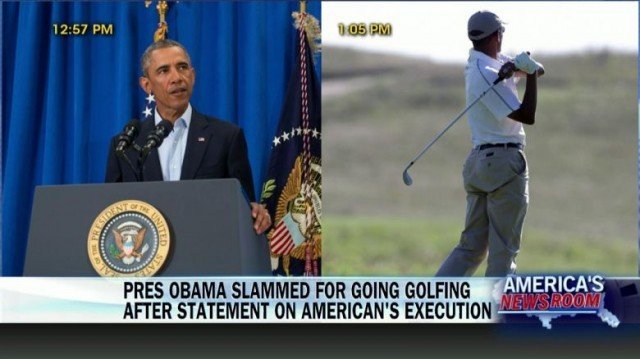 The golfer US president needs worry no more

November 21, 2014 8:53 am 0
On Assad’s Visit to Spain: Peeing in the Wind
The Assad Bridge to Somewhere
War of Aleppo is Turning Against Assad

Once upon a time, there was a golfer US president who did not like pressure. Every time his political foes or the public pressured him on some issue, he recoiled to some distant golf course. The pressure mostly happened because he was also, strangely enough, a serial liar. He would lie about anything dear to the hearts of the men and women who voted for him, and then when uncovered, he would hide under some tree leaves on a golf course.

Then the golfer US president discovered that in certain instances, he did not really need to recoil. All he had to do was create illusions, set-up political productions, and whip them into a frenzy in the media to divert the attention away from his lies and weakness. Since his policy on Syria was a sore issue among many that incessantly kept creeping up on him like a vampire creeps on his victim searching for fresh blood, the golfer US president decided to set-up his first production on Syria to relieve himself of all the pressure.

That pressure came from all over the world and mostly from two senior US Senators he hated with passion who warned him that his policy on Syria is disastrous, and that his naiveté and incompetence would cost the US dearly. The president was tired of being labeled incompetent and weak, even though the labeling was justified and true.

Under his Syria policy, the golfer US president refused to help the Syrian opposition battling the mass murderer thug ruling Syria even though it was to the best interests of the United States because that thug ruler produced over 50% of all terror in the whole region. The golfer US president was also tired of all the images and videos streaming from Syria showing the atrocities of the man he is refusing to remove.

On some occasions, the golfer US president figured if he said he wants the thug ruler removed or drew a red line to threaten him, the pressure may just ease up, but soon enough, when the world discovered it was a ruse, the pressure went up again. So, he decided to do something more permanently about that.

Eighteen months earlier, the Syrian thug ruler released from his prisons hardcore Islamists he hoped would divert the attention away from his rule should they begin to grow and prosper. He helped the Islamists occupy oil fields the income of which never reached his government anyway and bought the oil back from them to provide them with the capital needed to recruit more Islamists. He also helped them by ignoring their expansion and instead concentrated mostly on massacring women and children who could not fight back.

Eventually, those Islamists grew so fast and so dangerous that no one could control them anymore. They even created their own State. The Syrian thug has practiced growing terrorists on so many occasions before with total success. This time around though his did not realize how damaging his atrocities have been, which helped the Islamists recruit from 80 different countries.

The US president, who received intelligence reports every morning, passed some to his most trusted woman advisor. She concocted the political scheme that would relieve her boss from pressure on Syria. Because a year earlier a brave American photojournalist was captured by the thug ruler regime, the opportunity presented itself clearly, especially since the Islamists were growing out of control.

So, the US president dispatched to Damascus one of many secret envoys he keeps on-hand to insinuate to the thug ruler that he should release the photojournalist into the hands of the Islamists who would certainly behead him based on their violent history. Once they do, the secret envoy insinuated to the thug ruler, the US cavalry would come barging in to divert the attention away from him, as well, of course, to relieve his golfer US president from the pressure he endured for so long. It was a brilliant plan, which also gave the ruler thug all the opportunities he needed to massacre women and children at will away from the media’s watchful eyes.

And, so it became to be.

The thug ruler delivered the photojournalist to the Islamists, who beheaded him pronto. The US president, then, whipped the US media into a frenzy, which was easy because the Islamists were growing out of control. The golfer US president even created a new Islamist danger no one even heard about it before just in case there was not enough glue for his wag the dog production to stick.

Today, the golfer US president has nothing to worry about no more. Those two pesky senators no longer harass him to change his policy on Syria, neither half the world or the US media bothered him ever since. All the attention has been diverted towards the Islamists that his protégé in Damascus released from his prisons. The golfer US president used the photojournalist precious life as bait to have some peace.

Incidentally, the golfer US president handicap began improving immediately after he eulogized the photojournalist who died at the hands of the Islamists. His woman advisor called it “Two birds in one stone”.

Everyone, thereafter, lived ever so happy at the White House.

The golfer US president needs worry no more